THE MAN DIED AND SO WHAT? 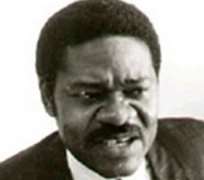 One of the high profile cold murder cases in the history of criminal justice in Nigeria that is recaptured and re-emphasized is the murder of Dele Giwa.

Few days ago, I stumbled on Giwa’s story in one of Europe’s reliable online portals based in London - EMN NEWS.

Though the story is over two years old, Giwa’s murder remains as fresh as the morning newspaper.

The story was based on interview with the principal actor in the controversial murder story, Ibrahim Badamosi Babangida. He was guest of the London weekly political program You Decide on London’s Ben TV.

The aged despot, a diabolical genius and a man with empty cranium with no droplets of wisdom declared that “Nigeria is bigger than Dele Giwa and that issue of his death should be forgotten forever.”

The interview conducted by the chief executive of the station, Dr. Alistair Soyode grilled IBB on the killers of Giwa.

IBB fielding questions wondered why the nation (Nigeria) is not sleeping because of only one person who met his death long ago. He said Giwa’s death should be treated as history.

In his characteristic grinning tooth-gap sheepish arrogance, he said: “Nigeria is bigger than a single individual. The nation should look on and move forward.”

Asked why are people fond of talking about Dele Giwa and linking his death to Babangida? “It is like saying that it was OBJ who killed Bola Ige,” explains IBB.

“If Bola Ige’s death cannot be linked to Obasanjo, why should Dele Giwa’s death be linked to Babangida?” asked IBB.

Life is a tangled web of injustice and wrong.
Giwa was a flaming journalist with a fiery message of rebuke for the oppressive military regime of IBB.

He was the pioneering journalist in Nigeria who blazed the path of investigative journalism bottled in a weekly authoritative brand known as Newswatch.

Giwa was extracted from our midst in 1986 through a parcel bomb. The parcel with the seal of the presidency marked “To be opened only by addressee,” was delivered to his Ikeja home in Lagos.

Receiving the parcel, Giwa said “This must be from the presidency.” Giwa had placed the parcel on his laps while it was being opened.

The parcel exploded torn Giwa into shards and shreds. Giwa’s life expired on the way to the hospital.

For more than a quarter of a century now, the question “Who killed Dele Giwa?” had burned like acid in our memory. His killers are still on the loose.

Given the corrupted and compromised Nigerian criminal justice system, it is not surprising that the country’s judicial system had successfully tap danced around the question.

The military junta of IBB was revered for the awful bountiful harvest of death reaped by his administration.

IBB finds so much pleasure in wickedness and cruelty to the extent that he will be angry with those who shorten such ordeals for his victims.

He enjoys fleeting pleasures of sin while he mistreated and oppressed our people.

IBB thrives on the liquidation of human lives. As far as he is concerned, they’re disposable diapers.

“Nigeria has moved on… why the nation not sleeping because of only one person…” exclaimed IBB.

Only one person? As far as IBB is concerned, Giwa is a footnote statistics!

The heartless sadist quipped: “Why are people fond of talking about Dele Giwa…?”

How dare IBB questioning us that we’re still in love with the memory of our beloved Giwa? Who is he to tell us how and why we should remember Giwa?

Why is IBB so anxious, disturbed, and irked that we still talk about injustice and the failure to unearth Giwa’s death? Why?

IBB is a little man with a narrow view who causes a world of trouble and ago ny for others. He’s is spiritually anemic, intellectually impoverished, and morally depleted.

It is this sardonic attack on traditional morality that galvanized enmity, hate, and rejection against IBB.

IBB is a man who refused to graduate in the college of life. With pride and a dead conscience, IBB shows no sense of remorse or sympathy for the life of a fellow being. No wonder, he’s too depraved to understand why we are still in deep grief over Giwa’s death.

As master coup plotter and dictator, IBB is accustomed to ordering executions of subordinates like yanking bird’s head in Purdue’s chicken Farm.

He once remarked that the only execution he ordered that he regretted was the killing of his boyhood friend, General Mamman Vasta. In other words, he didn’t give a damn for killing other ‘inconsequential’ human beings.

That IBB seems fazed that we insist on identifying the person or persons who killed Giwa, is the worst insult on our humanity.

With some modicum of common sense, IBB ought to know that we’re not the invalid people he thought we’re to be wheeled about on lies, or fed by fabrications, cosseted or nursed with tomfoolery and comforted by half truths.

We refused to buy his artificial reasons and sky-scrapper excuse over Giwa’s death. And what’s more, we’re not like IBB who walks through life with no questions, no mental struggles.

IBB is a man who is unsympathetic to sufferings and sorrows of others. How can he? After all, a man of darkened lenses of soul cannot see well.

The veil of wickedness over his mind prevents him from embracing the truth. And with the murder of Giwa, IBB has pitched himself as an enemy garrison against the rest of us.

Who is having sleepless nights over the death of Giwa? Why is IBB so uncomfortable and irritated at the mention of Giwa’s name?

How can IBB sleep at night with his two eyes closed the fact that Giwa’s murder happened on his watch as the dictator in charge of Nigeria at the time?

What kind of a man is Ibrahim Badamosi Babangida?
First and foremost, IBB is a law unto himself, and nobody in Nigeria dared to annul that law. On many occasions, he refused summons from legally constituted panels with no consequence.

He is an egotist, dramatist, boisterous, and bombastic fool.

Beneath IBB’s rough exterior and dramatic pose is a feeling of inferiority that tortures him.

He’s not academically trained. He had a constant fear and lived in perpetual fear that his sins would find him out.

He’s a personification of pomposity. He’s made wickedness the only festival of his soul. He’s a sparrow that wants to roost in eagle’s nest.

IBB is a bad photograph – underdeveloped and over-exposed!

The best way to promote unity is to promote truth. He’s alien to what is morally right and morally decent.

It is too late now to force or induce truth from IBB as to what he knew of the murder of Giwa and when he knew it.

Truth comes really through the person not merely over his lips. It must come through his character, affections, his whole intellectual and moral being.

A person who is not truthful grows remote. A person who abhors truth grows petty. IBB suffers from material plenty and spiritual poverty.

The sordid and sacrilegious acts that were the hall mark of his military gangsterism cover him with humiliation that qualifies him into merited oblivion.

Like the Biblical Alexander the coppersmith, Ibrahim Badamosi Babangida, the gap-tooth general and destroyer of our nation did us much harm. The Lord will judge him for what he has done!