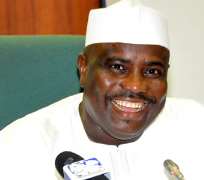 ABUJA, January 16, (THEWILL) - The House of Representatives, Wednesday, passed a vote of confidence on its Speaker, Aminu Waziri Tambuwal, even as it challenged those who are not satisfied with the leadership to table their grievances on the floor of the House.

This came as Tambuwal restated his commitment to fighting corruption in the country.

It would be recalled that some national newspapers had reported on Tuesday that a group if lawmakers in the House was plotting the ouster of Tambuwal for alleged shoddy dealings in the purchase of. Toyota Camry cars for members.

The confidence vote was taken following a motion by Hon. Ogbuefi Ozomgbachi ( PDP-Enugu) raised under matters of privileges drawing the attention of members to a publication in one of the national dailies, alleging plot to impeach Tambuwal over the purchase of 400 Toyota Camry cars.

According to him, the publication was a clear design to create disharmony since the decision to install anybody as Speaker of the House lies solely with the 360 members.

Ozomgbachi said if any member of the House has any grouse with the running of the House, he or she should table it before the House.

He frowned at a situation where members discuss the matters concerning the House on the pages of newspapers rather than discussing them on the floor of the House.

" If members have grouse, they should be free to come and discuss the matter in the House instead of taking it to the pages of newspapers. We are too mature to be led by reports in the newspapers," he said.

Consequently, Hon. Rasaq Osagie (ACN- Edo), moved a motion for a vote of confidence on the Speaker which was unanimously adopted.

He said the report in the dailies concerning plot by some members to impeach Tambuwal was a profound evidence of distraction to the House.

Osagie said the House was over-flogging the matter by discussing it on the floor.

In his response, Tambuwal said he was disturbed not because he was the Speaker but because members had worked hard to build the reputation of the House.

" We need to be truly committed to doing those things that have earned us confidence before Nigerians.

" I urge us to ignore the publication and take it as one of those things," he said.

He said the House, as an institution, would continue to work for the welfare of Nigerians.

Meanwhile, while welcoming members back from the Christmas and New Year break, Speaker Aminu Tambuwal said the House would continue to adopt more practical approaches to fight corruption by carrying out effective oversight function.

"In this regard, we shall continue to adopt a pragmatic and functional approach to ensure that the war against corruption is removed from the realm of rhetorics by exercising absolute diligence in our oversight function so as to enhance transparency and accountability.

"We are convinced now, more than ever before, that a situation where majority of the citizens continue to live in abject poverty while an insignificant minority corner the common wealth is not only unjust but unacceptable," he said.

According to him, the House would step up efforts towards ensuring quality legislation for Nigerians.

"As we begin a new year, we hope to be able to improve remarkably on the modest efforts we have made towards raising the quality of legislation in this country and the way we have handled issues arising from our oversight functions.

"This Honourable House has a contract with the Nigerian people to make sure they reap from the gains of our hard-earned democracy, " he said.