Uduaghan Charges Traditional Rulers To Propagate Peace In Their Domains 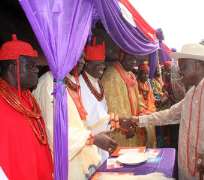 ASABA, January 16, (THEWILL) – Governor Emmanuel Uduaghan of Delta State has charged traditional rulers in the state to ensure peaceful co-existence in their kingdoms.

The Governor who gave the charge while presenting staff of office to the Ovie of Oghara Kingdom, HRM Noble Oyibo Eshemitan in Oghara, Ethiope West local government area of the state, said that there is no problem that cannot be settled peacefully through dialogue and understanding.

He insisted that traditional rulers should apply dialogue and traditional means to ensure peaceful co-existence in their kingdoms.

In particular, he decried a situation where youths fail to engage in meaningful ventures and re-iterating that traditional rulers can make the youths to be engaged in meaningful peaceful ventures as against acts capable of causing disharmony in the society.

“There is no problem that cannot be settled peacefully, there is no fight that cannot be resolved amicably”, the Governor said urging the people of Oghara Kingdom to always cooperate with the Ovie to ensure peace in the area.

Chairman of Ethiope West local government area of the state, Mr. Precious Ajaino in his welcome address, thanked the Governor for presenting the staff of office to the monarch and assured that the council would always assist royal fathers in the area to enable them carry out their functions effectively.

The event, marked with pomp and pageantry amidst colourful cultural display, witnessed impressive turnout of indigenes of Oghara, government officials and traditional rulers amongst others.