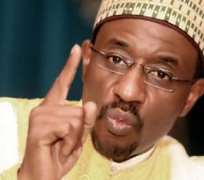 His statement came on the heels of another one made by the former National Chairman of the Peoples Democratic Party (PDP), Chief Audu Ogbeh, who said security challenges in the North had set the region on fire, while the former chairman of the Nigerian Communications Commission (NCC), Alhaji Ahmed Joda, accused political leaders of overheating polity and tearing the country apart.

The three of them spoke at the dinner organised by the Northern Reawakening Forum (NRF) where Sanusi, who was one of the guest speakers, said such bodies are no longer religious or cultural in nature but political associations masquerading as socio-cultural or religious organisations.

He said that the groups have constituted themselves into cults and business enterprises that have nothing to contribute to the government.

Sanusi also cautioned Nigerians against eating cow-hide (in local parlance known as ponmo), insisting that a policy should be put in place to export cow-hide as Nigeria 'imports 30 million pairs of shoes from China. However, the same quality of shoes that can be produced in Nigeria.'

On his part, Joda lamented the security situation in the country, especially in the North, stating: 'We are presently being torn apart and destroyed by religious and tribal antagonism.

'When we were truly Northerners, we behaved as one people facing and desiring one destiny. Today, we are being torn apart by our political leaders in search of power by any means. If we allow them, they will destroy us.'

He said Nigerians should make it clear to their leaders that they could no longer tolerate their unbecoming conduct, adding, 'We must not leave this situation unattended for street mobs to impose a solution.'

Joda warned that leaders and leadership with great potential should be allowed to emerge freely without manipulation by remote and anonymous leaders, operating in the shadows.

In the same vein, Ogbe said that the North was on fire, adding that the crisis in the region was a clear sign of economic failure.

He said the nation, especially the North, arrived at its present state possibly because the country was too comfortable to know what was going on, stating, 'What happens to us in the North is a Northern albatross and we are becoming refugees in the capital city.'

The National Chairman of the NRF, Hon. Mohammed Umara Kumalia, said the region had evolved from a people with a great and enviable culture and tradition to the present state where acute poverty, ethno-religious conflict, insecurity, disease and erosion of core values had taken over the life of many and made economic progress almost impossible in several parts of the North.

He said that the forum was established to offer support to other stakeholders to elevate the North to its glorious days when peaceful coexistence, tolerance, hard work, service, respect, equity, honesty, humility, trust, brotherhood, commerce, agriculture, trade and above all pride were the values and culture of the people that today populate about 76 per cent of the geographical entity called Nigeria.