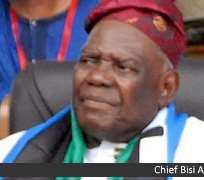 The People’s Democratic Party (PDP) in the South-West has alleged that the National Chairman of the Action Congress of Nigeria, ACN, Chief Bisi Akande was convicted and jailed for fraud by the regime of General Muhammadu Buhari in 1984.

The PDP berated the ACN and its agents for their incessant media attacks on former Deputy National Chairman of the PDP, Chief Bode George over his conviction, saying; “the same way Bode George was convicted was also the way the ACN National Chairman, Chief Bisi Akande was jailed for fraud by the General Mohammadu Buhari Military Regime in 1984. How then, can pot continue to call kettle black?”

The party, which described criticisms of Bode George’s appointment as member of a panel to reorganise its Board of Trustees (BOT) as hypocritical, said; “The PDP has the rights to give responsibilities to any of its members and imprisonment of anyone should be reformatory and not a stigma with which someone’s existence must be terminated.”

Zonal Publicity Secretary of the PDP, Hon. Kayode Babade said in a statement issued today that rather than turning Chief Bode George’s conviction into an anthem that they sing everyday, the ACN should tell Nigerians the propriety of having Chief Bisi Akande, who was jailed for fraud in 1984 as its National Chairman and Femi Gbajamiala, who was convicted for professional misconduct by the Supreme Court of Georgia as the House of Representatives Minority Leader.”

“The statement read; “We have followed with keen interest the continuous media attack on the person of our party’s former Deputy National Chairman, Chief Bode George by the ACN and its cohorts, the latest being the criticisms of Bode George’s appointment as a member of a panel to reorganise the PDP Board of Trustees.

“While we do not want to bother ourselves with the propriety or otherwise of Chief Bode George’s conviction not stealing a dime of public fund but for flouting procedure for award of contracts, we make bold to say that the ACN as a party does not have the required moral standing to chastise Bode George or any other person for that matter because its own National Chairman was equally jailed for stealing funds belonging to the old Oyo State.

“Interestingly, Bisi Akande was only released from jail and not pardoned by the Ibrahim Babangida government, and Buhari, whose government jailed him (Akande) is now his political mentor and rallying figure for their much touted merger party.

“It also a fact that it was late Chief Sunday Afolabi who prevailed on the Osun State PDP not to go to court to raise the issue of Akande’s conviction vis his qualification to contest election as a governor in 1999.

“Apart from Akande, was the ACN Leader in the House of Representatives, Femi Gbajabiamila not also convicted in faraway United States of America for stealing his client’s money?

“If these characters in the ACN have any sense of shame, they ought to know that despite his conviction, Bode George had the right to belong to, and participate in the activities of a political party the same way Bisi Akande is the National Chairman of the ACN despite being an ex-convict.

'Can conviction stop somebody from belonging to a group or a trade union?

And if he belongs to a group, can’t he take part in the activities of the group?

“Therefore, it is our challenge to the ACN hypocrites that they should clean their stinking house and leave Chief Bode George alone to live his life and exercise his constitutional rights.”