WHAT PROPONENTS OF ZONING IN ANAMBRA STATE FAILED TO UNDERSTAND 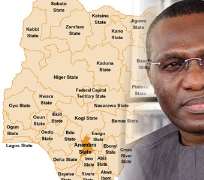 “The only injustice recorded in Anambra State since Nigeria embraced democracy in 1999 was the removal of ANDY UBA from office after winning 2007 governorship election in the State. He suffered personal loss, just as the people of his zone, as well as his local government area experienced unimaginable trauma. On account of these facts, and the need to right the injustice, zoning can make sense”- ANONYMOUS

There is no doubt that the term “Zoning” gained currency in Nigeria in 1999 when General Abdulsalami Abubaker the then Head of State, consummated his administration’s transition programme. He tailored the transition to assuage the Southwest over the annulment of June 12 Presidential election believed to have been won by Late MKO Abiola.

The perceived injustice meted out to Abiola, a Yoruba man meant that effort was invested in producing somebody from his region to calm frayed nerves. To ensure justice meant that the political parties were fundamentally organized to produce Nigerian President of Yoruba extraction. Based on the criteria laid down by the Military Government for registration of political parties, only three parties were registered. We had Peoples Democratic Party [PDP], All Peoples Party [APP] and Alliance For Democracy [AD]. It was not by accident that these three [3] political parties eventually presented two [2] candidates for the Presidential election in 1999. In a nutshell, Obasanjo of the PDP defeated Chief Olu Falae of the APP/ AD alliance in the Presidential election proper.

That, in simple term marked the dawn of new era and the political terminology ZONING was born in Nigeria politics. Thus, anybody talking of Zoning in Nigeria today without recourse to the genesis of the term and usage, is either out for mischief or is plainly ignorant sentimentally. Frankly speaking, if Zoning should be adopted in Anambra State, then governorship position must go to Aguata Local Government in Anambra South. This is because as could been seen in 1999 Zoning arrangement, injustice was done to Southwest and Presidency was seeded to the Zone. Similarly, injustice was done to Andy Uba in 2007, when he was asked to surrender the mandate freely given to him by the people of Anambra State by the Apex Court that lacked jurisdiction in the first place.

Unlike the annulment of June 12, the unjust removal of Andy Uba in 2007 after taking oath of office as the governor of Anambra State, is leading Nigeria from one confusion to another. The first confusion is the unconstitutional staggering of Governorship elections in Nigeria.

Secondly, attempt by the National Assembly at elevating the Apex Court judgment above the Constitution of Nigeria, by amending relevant sections of the Constitution to align with the Supreme Court’s decision, has even led to more uncertainty. Thirdly, the recent judgment of the Apex Court on the tenure of five Governors that tend to support NASS amendment on the tenure of a serving Governor that won re-run elections has compounded the situation. Judiciary in general has become a tower of Babel over the issue of a serving Governor that won re-run as a result of nullification.

Without sounding pre-judicial, if Governor Idris Wada wins the current court case against his candidature, will he also leave office on May 28, 2015 when we know he took over five months after May 29, 2011? Or will the Constitution be amended to accommodate another person from the same party. Fourthly, the recent cry by the Chairman of INEC of the cost implication of staggered election in Nigeria and his assertion that it did not conform with global best practices in election conduct, is yet another confusion arising from the injustice done against Andy Uba. Apart from the ruling of the Apex Court on the tenure of Peter Obi, what further proved the injustice against Andy Uba is that INEC was cleared to go ahead with the general election via that judgment of a Federal High Court in Abuja, in the case between NDP and INEC, wherein, the Court said, NOBODY CAN STOP GENERAL ELECTIONS BECAUSE OF ITS CONSTITUTIONALITY.

The latest electoral act that slated a time frame for deposition of electoral cases has generally been termed unjust by legal luminaries and many Nigerians. The surprising manner in which good cases were thrown away by the courts as a result of the current law on electoral litigation time line led to public outcry. Those who may not know the reason behind the 180 days time lines are reminded that it was born out of an attempt to correct the injustice done to Andy Uba through the back door. The current court case against President Jonathan standing for election in 2015 on account that the Constitution of Nigeria stipulates that nobody can be sworn in more than two time as the President of Nigeria. Is yet another issue arising from the injustice meted out to Andy Uba.

From the foregoing, it is apparent that for any zone to talk of zoning as some people are currently doing for Anambra North, that zone must have cogent and verifiable reason to do so. There is no history of electoral injustice meted out to the people of Anambra North zone in the past to warrant the seeding of the governorship position. Here, there is every reason to seed the governorship position of Anambra State to Aguata Local Government Area to correct the injustice done to Andy Uba.

This will be just and fair.
Written By EMEKA ORAETOKA
[email protected]