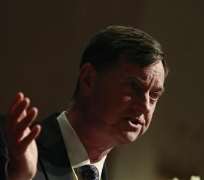 Evans also forecast the U.S. unemployment rate would be 7.4 percent this year, easing to about 7 percent in 2014.

"One good indicator of labor market improvement would be if we saw payroll employment increase by 200,000 each month for a number of months. We've been averaging about 150,000, but it's been very uneven ... we need a higher pace of employment growth and less volatility in that pace," Chicago Fed President Evans said.

The creation of 1 million jobs over six months would be a "substantive" improvement, but bringing unemployment down to the key level of 6.5 percent was likely to take much longer, probably until mid-2015, he said, speaking at the Asian Financial Forum in Hong Kong.

It also provides additional accommodation by assuring markets that rates will remain low even after the economy perks up, he said.

"Given more explicit conditionality, markets can be more confident that we will provide the monetary accommodation necessary to close the large resource gaps that currently exist," he said. "Additionally, the public can be more certain that we will not wait too long to tighten if inflation were to become a substantial concern."

Last month, the Fed ramped up asset purchases aimed at spurring growth, and pledged to keep rates near zero until the unemployment rate drops to 6.5 percent, as long as inflation expectations do not climb above 2.5 percent.

Evans, who rotates into a voting spot on the Fed's policy-setting panel this year, had been pushing for exactly such a threshold-based policy for more than a year, saying the Fed needed to take a much more activist role in trying to meet its mandate to boost employment.

His speech on Monday was his first since mid-2011 to omit an explicit call for further Fed easing, suggesting he is now comfortable that the current stance of monetary policy will help bring down unemployment, still high at 7.8 percent.

Kansas City Fed President Esther George and other critics of the Fed's bond-buying program and low-rate policy have warned the central bank's actions could overheat the economy, leading to unwanted inflation.

Evans, one of several policy "doves" set to speak early this week, sought to head off such criticism.

While the Fed's new 2.5-percent inflation threshold "allows for inflation at times to run modestly above" the Fed's 2-percent goal, it in fact acts as a safeguard against overheating, he said.

The U.S. economy grew at a 3.1 percent annual rate in the third quarter, but growth is expected to have slowed in the final months of the year. Last month, Fed policymakers said they expected GDP growth of between 2.3 to 3.0 percent this year, and 3.0 to 3.5 percent in 2014.

Meanwhile, most expect inflation to run a bit below the Fed's 2-percent target.

U.S. lawmakers on January 1 struck a partial deal that avoids the worst of planned tax rises known as the "fiscal cliff," but put off big decisions on spending cuts for two more months.

Evans said the effects of fiscal policy on U.S. growth are so far about what he had expected when making his growth forecasts late last year.

But he cautioned lawmakers on taking overly aggressive steps to cut back spending.

"The United States must consolidate its public sector finances; but it must do so gradually if we are to avoid further economic turmoil or another downturn," Evans said.