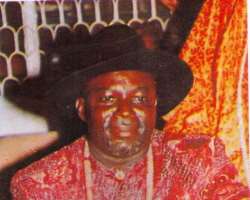 Walter Duru
Youths of the Niger Delta region, under their umbrella youth body, Niger Delta Youth Movement, NDYM, Thursday, had a change in government, as its newly elected National Executive Council was inaugurated.

The occasion, which was held at the Oba Akenzua Cultural Centre, Airport Road, Benin City, Edo State, witnessed a large turn out of youths from the nine states of the Niger Delta region.

In his inaugural address, President of the body, Comrade Ajulisan Akumagba pledged his commitment to ensure that youths of the region take their rightful position in the scheme of things in the Country.

He lamented the marginalization of the region by successive administrations in the Country and urged the Federal Government to take deliberate steps to ensure rapid development of the region, even as he disclosed the steps to be taken to ensure that youths of the region are empowered.

“Very radical, but strategic steps shall be taken to ensure that rapid development of the region is actualized and our youths empowered and emancipated, as a sure way of dousing down tension in the region.

This administration, in collaboration with other relevant stakeholders, shall implement a project, aimed at re-packaging the region, with the view to changing its perception in the outside world.

Modalities have also been drawn to address the issue of restiveness and militancy in the area through practical youth empowerment programmes.

For instance, we will generate incentives to engage our youths in cash crop farming, while exploring the tourism potentials currently underutilized in the region. Already, a channel of communication has been opened with some foreign firms who have indicated interest in to invest in the region, especially, in the agricultural sector.

Consequently, a farm estate project, capable of employing over eight thousand Niger Delta Youths is presently being designed for implementation and a foreign partner already involved”, he stressed.

On entertainment and sports, Comrade Akumagba said “Again, this administration shall establish a home movie/film industry that shall also engage thousands of Niger Delta Youths. We shall also ensure regular sporting activities, aimed at diverting the minds of our youths from crime to sports. Efforts shall also be intensified to encourage and sponsor talented men and women of to make successful career in sports”.

On the increasing incidence of pipeline vandalism in the region, the NDYM boss disclosed his intention to involve grass root youths of the region in the securing of oil pipelines, adding that discussions have already been opened on same.

Continuing, President Akumagba lamented the delay of the Federal Government in releasing the white paper on the report of the Technical Committee on the Niger Delta, as well as its implementation and further declared the readiness of his administration to get it do same, describing it as crucial to restoration of absolute peace in the region.

He also disclosed its resolve to monitor the activities of leaders of the region, with the view to ensuring a transparent and people oriented government, while promising to frown at corrupt leaders in the area.

The Occasion was attended by very important dignitaries among whom were former chairman of the Federal Roads Maintenance Agency and publisher, Champion newspaper, Chief [Dr.] Emmanuel Iwuanyanwu, representatives of the governors of Edo, Imo, Delta, and Abia, Grand Commander of the Oil Kingdom, Chief[Dr.] Placy Ekwueme, Lawmakers, Political leaders, Traditional Rulers, among others.

It would be recalled that following the expiration of the tenure of the former president, Mr Onienghe Elekima, a general election was held in Owerri, the Imo State Capital, which saw to the election of the present executive Council, led by Comrade Akumagba.