KOLOKUMA/OPOKUMA REBIRTH & RESTORATION CRUSADE: AN OUTREACH IN WORDS AND DEEDS 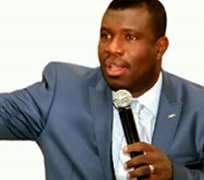 Here comes the great rebirth and restoration in the land of Kolokuma/Opokuma in tandem with prophetic Scriptures. An outreach being led by Apostle David Zilly Aggrey, the General Overseer, Royal House of Grace International Church, Worldwide and Pastor Sienye Lulu Briggs, Chief Executive of OB Lulu Briggs Foundation. The Scriptures foretold of this spiritual re-awakening, rebirth and restoration in these words: Acts 3:18-25(Amp.): “Thus has God fulfilled what He foretold by the mouth of all the prophets, that His Christ (the Messiah) should undergo ill treatment and be afflicted and suffer.

So repent (change your mind and purpose); turn around and return [to God], that your sins may be erased (blotted out, wiped clean), that times of refreshing (of recovering from the effects of heat, of reviving with fresh air) may come from the presence of the Lord; And that He may send [to you] the Christ (the Messiah), Who before was designated and appointed for you--even Jesus, Whom heaven must receive [and retain] until the time for the complete restoration of all that God spoke by the mouth of all His holy prophets for ages past [from the most ancient time in the memory of man]. Thus Moses said to the forefathers, The Lord God will raise up for you a Prophet from among your brethren as [He raised up] me; Him you shall listen to and understand by hearing and heed in all things whatever He tells you. And it shall be that every soul that does not listen to and understand by hearing and heed that Prophet shall be utterly exterminated from among the people. Indeed, all the prophets from Samuel and those who came afterwards, as many as have spoken, also promised and foretold and proclaimed these days. You are the descendants (sons) of the prophets and the heirs of the covenant which God made and gave to your forefathers, saying to Abraham, And in your Seed (Heir) shall all the families of the earth be blessed and benefited”.

Kolokuma/Opokuma is the local government headquarters of Kolokuma/Opokuma Local Government area of Bayelsa State made up of 15 villages. Before the coming of Christianity to Kolokuma/Opokuma, there were many social activities which the people enjoyed but they were all connected with the worship of the gods of the town. On such occasion, the paths leading to the idols premises, which were usually surrounded with forests, were cleaned. Various domestic animals, notable fowls, goats and sometimes cows were sacrificed. And people assembled at the shrine to eat, drink and dance in honour of the god. Some of these feasts lasted up to a week. There were other feasts which were cultural in nature but were still connected with the gods. These included the new yam festival, title-taking ceremonies, outing ceremonies of new born children and others. The period before the light of Christianity came into Kolokuma/Opokuma was one of complete darkness which was visible in every aspect of the lives of the people.

It was a time of mass belief in, and worship of idols, images, nature objects such as hills, rivers, streams, markets, forests, trees; a time of belief in the absolute sacredness of the python and a number of other animals. It was also a period of mass belief in the power of black magic, juju and witchcraft, and these were freely applied in many social engagements such as in wresting and masquerading. What paved way for this crusade outreach was that the recent flood washed away shrines and the gods the people worships. According to Pastor James Chuku, the Administrator of Royal House of Grace International Church who led advance team already in Kolokuma/Opokuma preparing for the crusade said: “With the washing away of the gods and shrines in response to prophetic Scriptures with the anointment of Apostle David Zilly Aggrey and raising of national altar on 12 December 2012 at Royal House of Grace International Church, a son of the community, it was time to raise altar of rebirth and restoration in the land of Kolokuma/Opokuma and Bayelsa State at large to eliminate, free, deliver and restore the dignity/honour/lifting and advancement of the people otherwise long subjected to demonic and Satanic powers over the years”.

The crusade which is a collaborative outreach of Royal House of Grace International Church and OB Lulu Briggs Foundation has the support of the Bayelsa State Government. The Governor Seriake Dickson is going to be represented to declare the programme opened by the State Commissioner of Health, Dr. Anakuere Awoli. The Crusade which has Apostle Zilly Aggrey and Pastor Sienye Lulu Briggs as Guest Speakers, also have a 80 man medical team that shall offer free medical aid to people in need from all over Bayelsa State and beyond. The free medical treatment of all manner of diseases shall start from on 15th through 18th January 2013 from 8.00am till 3.30pm each day. The crusade outreach ministration shall start on 14th January 2013 the opening day through 18th January 2013. The advance team led by Pastor James Chuku has moved in equipment, resources and materials to make the crusade u huge success. Rallies are going on throughout the 15 villages, invitations have been extended to all people of Bayelsa State and beyond. Top Government officers, civil servants and politicians, National Assembly Senators, Representatives, State Legislators, Local Government Chairmen, Clergies and Churches have indicated their attendance come 14th to 18th January 2013 at Igbainwari, Opokuma, Bayelsa State.

The crusade outreach is committed to the Rebirth and Restoration of Salvation for Individuals, Churches, Nations, Communities, Families etc. The outreach in words shall be proclamation of the life changing gospel of Jesus Christ and in deeds shall be the offering of free medical treatment to the sick and those afflicted with all manner of diseases from all over Bayelsa State and beyond. It promises to be a time of refreshing from the presence of the Lord that lead to full restoration of Kolokuma/Opokuma in destiny. Kolokuma/Opokuma will experience rebirth and restoration of her destiny and glory. Have question you may call: 08033399821 or email: [email protected] Stay blessed.