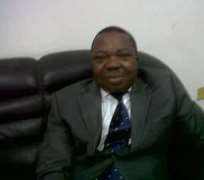 A Nigerian Professor disclaimed by the university where he teaches after claiming to have found a cure for HIV/AIDS has eaten the humble pie and apologised.

Prof. Isaiah Ibeh, Dean, School of Basic Medical Science at the University of Benin (UNIBEN) in Nigeria's South-South, recanted yesterday in a five-paragraph statement he distributed to journalists in Benin City, capital of Edo State.

He said that even though he is working on an herbal therapy for the dreaded disease, he has yet to reach the stage of claiming to have found a cure for HIV/AIDS.

Hear Prof. Ibeh: 'The true position is that some observations of our Research are preliminary and the research is still ongoing.

'I am very sorry for the embarrassment this has caused the University of Benin and Professional Colleagues, realizing that there are procedures of reporting such Scientific result.'

As reported two days ago by News Express, Prof. Ibeh had made the claim on Monday, only for him to be disowned by UNIBEN authorities the next day. Ibeh's claims were also dismissed by the National Agency for Food, Drugs Administration and Control (NAFDAC), which said the drug was yet to be submitted to it for tests as required by law.

In a statement issued yesterday by UNIBEN's Public Relations Officer, Barr. Harrison Osarenren, the school officially recognised and appreciated Prof. Ibeh's efforts, but said: 'For the avoidance of doubt, the said claim by Prof. Ibeh is a research exercise which is still in its infancy stage and therefore, on-going.'

AIDS, which claims millions of lives across the world every year, is contracted primarily through unprotected sex and has no known cure.