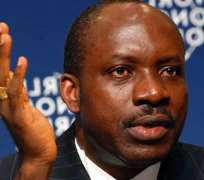 SAN FRANCISCO, January 10, (THEWILL) - A former Governor of the CBN, Mr Charles Soluso was Thursday afternoon arrested by operatives of the EFCC inside his Abuja residence.

THEWILL gathered that Soludo was taken into custody following his alleged role in the controversial polymar currency contract awarded to an Australian firm during his tenure as Governor.