PDP: We Are Resolving Our Differences Amicably, Says Bamanga Tukur 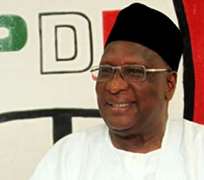 SAN FRANCISCO, January 09, (THEWILL) - The Chairman of the People’s Democratic Party (PDP), Alhaji Bamanga Tukur, Wednesday in Abuja, declared that the ruling party was doing its best to resolve the differences among its members in an amicable manner.

While admitting that there were, indeed, rifts within the party, the chairman said efforts were ongoing to reconcile the aggrieved members so as to move the party forward.

Tukur stated this after a two-hour meeting between the National Working Committee (NWC) of the party and President Goodluck Jonathan, Vice President Namadi Sambo, Senate President David Mark and Speaker of the House of Representatives, Aminu Tambuwal at the Presidential Villa.

Ambassador Ojo Madueke had earlier in the day told State House correspondents at the end of the party's Board of Trustees (BoT) meeting at about 1:30am that the party was working hard to resolve the disputes among members of the NWC.

Though Madueke, who was flanked by Prof. Jerry Gana, Senator Walid Jibrin and the presidential spokesperson, Dr Reuben Abati, noted that there was no major cracks in the party, he stressed that “a huge party like the PDP, with a multiplicity of interests” was bound to generate heated debates from disparate quarters.

Tukur was to later corroborate this, saying as a family, the party was capable of tackling any problem that may rear its head.

He however promised that as the father of the party, he will work diligently to unravel the differences, laid them bare before Nigerians and resolve them once and for all.

" I can assure that like any other family, there may be disagreements but based on principle, not disagreement for anything.

"We have resolved all our differences. Some differences, you will bring them to light, examine them and find out why there has been disagreement and you go back and do what you believe is right.

“I am here with the Secretary of the party, deputy National Chairman, the Women leader and our mouthpiece. I am the father of the party. I am the family head and therefore, I am here to tell you everything you want to know. I can tell you that we are one and the same."

On the party’s position on the crises within the Adamawa State executive council and its congress, Prof. Gana, who is the chairman of the Special Committee set up by the BoT to align the membership of the party, said the party will raise a team to find a lasting solution to the problem.

Madueke had explained that “any statement by a member of the NWC is a reflection of the contending interests being resolved," adding "This should not be seen as anything.”

According to Madueke, who is also a member of the NWC and attended Wednesday’s meeting, “Debates are vibrant, compared to the silence of the graveyard that has characterised other political parties.”

He maintained that the leadership of the PDP was on top of all challenges arising from varying differences “and will continue to support the president in the realisation of the transformation agenda."

He added: “All outstanding issues that are germaine will be addressed in a major orderly fashion. The party remains united, forward looking and remains focused to serve the citizenry better in 2013."