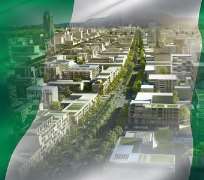 The United States based global economic and political intelligent agency, National Intelligence Council (NIC) recently had a radiant prediction on Nigeria’s economic prospects by 2030. According to NIC report, Nigeria and many other developing economies including Colombia, Indonesia, South Africa and Turkey will play a vital role in the global economy by the 2030 and beyond.

The report also made an already unfolding reality that China will overtake United States economy while Asia will become powerhouse of the global economy. In case of China and Asia, all the economic indicators are pointing to the inevitability of their economic supremacy. Even further, China military power accelerates with increasing military strength due to rising spending in its military industrial complex.

This is how NIC report put it:
"In addition to China, India, and Brazil, regional players such as Colombia, Indonesia, Nigeria, South Africa and Turkey will become especially important to the global economy. The diffusion of power among countries will have a dramatic impact by 2030. Asia will have surpassed North America and Europe combined in terms of global power, based upon GDP, population size, military spending, and technological investment.

China alone will probably have the largest economy, surpassing that of the United States a few years before 2030. Meanwhile, the economies of Europe, Japan, and Russia are likely to continue their slow relative declines."

But when it comes to Nigeria the affirmative economic prospect may be there but the road map and the given reality are clouded and foggy.

Therefore many Nigerians including economic stakeholders and policy makers are receiving the good news with grain of salt. The point here to make is that Nigeria has everything it takes to emerge as a true regional economic power house with global influence. But in reality Nigeria may not have the discipline and will power to actualize the prospect. This does not imply that it is not doable but it is logical to comprehend that the pathway is loaded with difficulty and complex problems.

This is why Nigerians including Minister of Finance, Dr. Ngozi Okonjo-Iweala are cautiously optimistic. Nigerians and interested parties should listen to Okonjo-Iweala on Nigeria’s economic prospect. She believes in Nigeria and she is bullish on Nigeria but she is saying that Nigeria is not yet on the pathway to the promise land. Her words, "We are of course happy at such a forecast and we need to work harder as a nation to ensure we get there."

Nigeria has the potential to make the forecast a reality but the path to a powerful and sustainable economy is paved with discipline, hard work and unreliability. It is doable but it will take a lot of hard work. Nothing good comes easy and such a tall order beckons a serious industry and order.

Ugochukwu Okoroafor, CBN Director of Communications said that Nigerian receive of the news from NIC was filled with pessimism. Okoroafor said:

"I think Nigerians don't take themselves as serious as the rest of the work sees us. We all need to come together and see what we have here and work. The world sees us as a major power; I think that we don't fully appreciate the power that we have and what is taking place in the rest of the world and how Nigeria is in position to take full advantage of this; others seem to see it but we don't."

With all due deference to Hon.Okoroafor, I think Nigerians have every reason to be cautious even cynical. Nigerians point of references and history taught them to be careful not to wholly consume the news no matter how tempting or sweet it maybe.

Nigeria has in past lunched many programs including “Operation Feed the Nation” and “Green Revolution, but they all failed. Even the recent 2020 vision program is floundering and many international institutions including IMF has predicted that Nigeria will not make to one of the twenty largest economies by 2020.

But in spite of our history, I will cast my lot with Okonjo-Iweala, Nigerians must work harder, come together, set achievable priorities, then kick the ball to the net. Therefore Nigerians cannot afford to be cynical despite our history; we cannot afford to curse “the darkness but light a candle,” as ancient Chinese saying goes.

The strategies for realization of NIC forecast must be clearly formulated and diligently implemented. The key to herculean economic growth and its sustainability are rooted on political economy stability. The problem of instability that comes through Boko Haram, Kidnappings, pirates menace and criminality must be uttermost priority of the federal government. The

most important duty of a government is the protection life and property.

Economic prosperity cannot thrive in absence of peace and stability.

Education plays a vital and significant role in economic development and advancement. Nigeria needs well trained and healthy workers to able to compete on the international scale. Nigeria must reverse brain drain and attract back many qualified Nigerians who are living abroad.

Nigeria must diversify her economy to have arrays of products other than oil to generate ample foreign exchange and strengthen naira with a quantifiable war chest as a bulwark against currency speculators. It must be noted that the economy of 21st century cannot be built solely on oil and natural resources but on human capital and complex problem solving intelligence that are grounded on high-technology training and superior education.

Then comes the most important which is the provision of social and physical infrastructures. A well-built roads, railways with effective delineated traffic rules and regulations. Steady provision of electricity and running water make the wheel of industrial production and output possible and sustainable. Nigeria can surely make it to a powerful economy not with words and big mouth but with action and hard work.