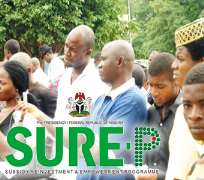 The State Implementation Committee for the Subsidy Reinvestment Programme (SURE-P) on Tuesday said that Cross River would target 10,000 unemployed people under the programme in 2013.

The state Chairman, Mr Agom Jarigbe, said this in Calabar at the inauguration of the Sensitisation/ Orientation Workshop for the implementation of SURE-P in the state. Jarigbe said 5,000 unemployed people would benefit from the Federal Government's SURE-P programme while 5,000 people would benefit from the state's controlled SURE-P. “Right now we are employing 3,000 and later we will take more 2,000 making it 5,000 but before the year runs out Cross River will have 10,000. “The SURE-P at the state level will employ 5,000; then under the Federal Government's SURE-P we will have 5,000, '' he said.

According to him, beneficiaries of the programme are expected to receive N10,000 monthly stipend and after one year they will be fully absorbed into another bigger endeavour. He said that the beneficiaries were expected to carry out community work and advised them to work hard in order to justify the good intention of the government.

He said the Federal Government was targeting 370,000 beneficiaries across the country under the first phase of SURE-P. Mr Eta Mbora, the Chairman, Calabar Municipal Area Council, said that the SURE-P programme was in fulfillment of President Goodluck Jonathan's campaign promise. “You could remember that the president was here during his campaign where he promised to create Jobs for Nigerians. “It was also part of the campaign promises of our State Government to create employment for the people,'' he said.

Eta said that the programme was purely meant for the unemployed and the vulnerable members of the society and advised the beneficiaries to avoid cheating. “You must be unemployed for you to benefit in this programme; there is no need for cheating; it is just like payment of unemployment allowance.''

Earlier, representative of the Southern District of Cross River in the committee, Dr Offiong Ani, said the beneficiaries were expected to work for five hours each day of the week. Ani said that the money was not meant for jamboree and called on the beneficiaries to brace up for the challenges of community service. “You could be called upon to do anything five hours every five days of the week, '' Ani said. Mr Nelson Egbuka, the representative of the United Bank for Africa, said that the bank was the custodian of the fund and responsible for its management and disbursement.

Egbuka said the beneficiaries were required to open account with the bank where their funds would be deposited. One of the beneficiaries, Mr Effiong Bassey, a physically-challenged person, said he was happy to be among the first set of beneficiaries and thanked the government for the programme. (NAN)