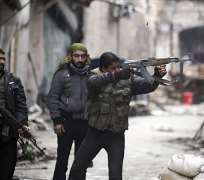 Fighting raged across Syria on Monday with clashes reported just a few miles from where President Bashar al-Assad had unveiled a "peace plan" that Syrians on both sides said would do nothing to end the country's 21-month-old uprising.

Hours after Assad addressed cheering loyalists at the Damascus Opera House on Sunday in his first public speech in months, fighting erupted near the road to the city's international airport, the Syrian Observatory for Human Rights said.

The opposition-linked group said artillery hit the district of Aqraba, 3 miles from the Opera House. Fighting continued all night and into Monday around the capital, as well as in the northern provinces of Idlib and Aleppo, it said.

In central Syria, the towns of Taybet Imam and Halfaya were bombarded with aerial strikes and artillery, said Abu Faisal, an activist speaking over the internet from Taybet Imam.

"Every four to five minutes, we hear the burst from a rocket. We cannot get any wounded out because we are essentially under siege by the shelling," he said, adding that many civilians had fled. Taybet Imam sits on an entrance to Syria's main north-south highway, close to the central city of Hama.

The government restricts access by international media and the accounts could not be verified.

Damascus residents said Assad's speech, which offered no concessions to his foes, was met with celebratory gunfire in pro-Assad neighborhoods.

But even there, some saw no sign peace was closer: a loyalist resident of southern Damascus reached by internet said the speech was eloquent but empty.

"It sounded more like gloating than making promises," said the woman, who gave only her first name, Aliaa. "I agree with the ideas but words are really just words until he takes some action. He needs to do something. But even so, everything he suggests now, it is too late, the rebels aren't going to stop."

"NO ONE CARES"
In the once-affluent district of Mezzeh, scene of several bomb attacks, an Assad critic said people had more pressing concerns than a TV speech. "Here, no one cares about this speech. They care about food and electricity."

Another said few people had watched the speech and that Assad's crackdown would not stop: "Military operations will continue in full swing, and he is staying."

France, the United States, Britain and Turkey all said Assad's speech, his first to an audience since June last year, showed he had lost touch with reality after unrest that the United Nations says has killed 60,000 people.

U.S. State Department spokeswoman Victoria Nuland had harsh words for Assad when she was asked whether the United States regarded him as a rational actor and whether he was "evil."

"I don't think anybody who is guilty of the kinds of crimes against your own people that he's guilty of could be considered rational," Nuland told reporters in Washington. "I personally consider what he's done evil."

"Bashar al-Assad's speech is further evidence of just how far he has cut himself off from reality in order to justify his repression of the Syrian people," French Foreign Ministry spokesman Philippe Lalliot said.

The plan described by the Syrian leader as a new peace initiative proposed an army ceasefire only after rebels halt their operations and summoned Syrians to mobilize for a war to defend the state against "a puppet made by the West".

The United Nations said Secretary-General Ban Ki-moon was disappointed that Assad's speech rejected the idea of a transitional government to pave the way to new elections - a central plank of a peace plan promoted by international envoy Lakhdar Brahimi.

George Sabra, vice president of the opposition National Coalition, said the putative peace plan "did not even deserve to be called an initiative".

"We should see it rather as a declaration that he will continue his war against the Syrian people," he told Reuters.

There was no immediate response from Moscow, which has acted as Assad's main protector on the diplomatic stage. Russian state offices were quiet for the Orthodox Christmas holiday.

Syrian state television played up the speech, showing footage of convoys of cars driving through main streets in Damascus. People waving the Syrian flag leaned out of car windows and some braved the cold and rain to walk alongside.

"It was a victorious speech that respects the martyred Syrian soldiers," said one man on state TV, adding that his brother had been killed fighting the opposition.

After six months of advances, rebels now control wide areas of northern and eastern Syria, most of its border crossings with Turkey and a crescent of Damascus suburbs.

Assad's government is still firmly entrenched in the capital and controls most of the densely populated southwest, the Mediterranean coast, the main north-south highway and military bases countrywide. Its helicopters and jets are able to strike rebel-held areas with impunity.

U.S. military cargo planes carrying equipment and personnel arrived at the Incirlik air base in Turkey on Monday, part of a deployment of NATO Patriot anti-missiles to bolster security along Turkey's 900-km (560-mile) border with Syria. Dutch Patriot missile batteries bound for Turkey left an army base in the Netherlands.