Turmoil In Indian Court As Five Accused Of Rape Appear 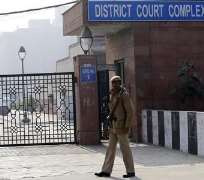 Five men accused of the gang rape and murder of an Indian student appeared in court on Monday to hear charges against them, after two of them offered evidence possibly in return for a lighter sentence in a case that has provoked widespread anger.

The five men, along with a teenager, are accused of raping the 23-year-old physiotherapy student when she boarded their bus after going to the cinema in New Delhi on December 16. She died two weeks later in a Singapore hospital.

The attack on the student has ignited protests against the government and anger towards the police for their perceived failure to protect women. It has also provoked a rare national debate about rising violence against women.

Reuters images showed the men stepping out of a blue police van that brought them from Tihar jail, and walking through a metal detector into the South Delhi court, across the street from the cinema where the victim watched a film before boarding the bus with a male friend on December 16.

Following rowdy scenes in the packed court, the magistrate, Namrita Aggarwal, closed the hearing to the media and the public. The court was cleared and police were posted at its doors before the accused were brought in.

"Keeping in view the sensitivity of this case that has risen, the proceedings including the inquiry and trial are to be held in camera," Aggarwal said, before ordering people not connected with the case out of the courtroom.

A police guard said the five men had their faces covered when they entered the court, where the magistrate was due to read charges against them. The five have already been charged with murder, rape and abduction along with other offences.

Aggarwal said the next hearing would be on January 10. She did not say when the case would go to trial in a separate, fast-track court, set up after the attack on the woman.

Earlier, an argument broke out in court when a lawyer offered to defend the men. He was shouted down by colleagues who said the accused did not deserve representation, given the brutality of the crime.

Two of the accused, Vinay Sharma and Pawan Gupta, moved an application on Saturday requesting they be made "approvers", or informers, against the other accused, Mukesh Kumar, Ram Singh and Akshay Thakura, public prosecutor Rajiv Mohan told Reuters.

Mohan told Reuters he was seeking the death sentence given the "heinous" crime.

"The five accused persons deserve not less than the death penalty," he said, echoing public sentiment and calls from the victim's family.

Members of the bar association in Saket district, where the case is being heard, have vowed not to represent the accused.

GROUNDS FOR APPEAL?
But on Monday, Supreme Court lawyer Manohar Lal Sharma stood up to offer representation to the men. He was booed by other lawyers in the court, where media and advocates had gathered before the men were due to appear.

"We are living in a modern society. We all are educated. Every accused, including those in brutal offences like this, has the legal right to represent his or her case to defend themselves," Lal Sharma said.

"I'm afraid they won't get justice, that's why I have decided to appear for them in the court," Sharma said, but added it was up for the court to decide.

Police have conducted extensive interrogations and say they have recorded confessions, even though the five have no lawyers.

Legal experts say their lack of representation could give grounds for appeal should they be found guilty. Similar cases have resulted in acquittals years after convictions.

But some legal experts have warned that previous attempts to fast-track justice in India in some cases led to imperfect convictions that were later challenged.

The men, most of them from a slum neighborhood, will be offered legal aid by the court before the trial can begin.

The sixth member of the gang that lured the student and a male friend into the private bus is under 18 and will be tried in a separate juvenile court.

The government is aiming to lower the age teenagers can be tried as an adult, given widespread public anger that the boy will face a maximum three year sentence.

The victim, who died on December 29 in hospital in Singapore, where she had been taken for treatment, was identified by a British newspaper on the weekend but Reuters has opted not to name her.

Indian law generally prohibits the identification of victims of sex crimes. The law is intended to protect victims' privacy and keep them from the media glare in a country where the social stigma associated with rape can be devastating.