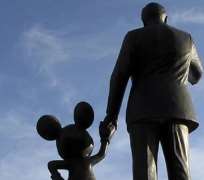 Walt Disney Co (DIS.N), which reported record earnings in November, started an internal cost cutting review several weeks ago that may include layoffs at its studio and other units, three people with knowledge of the effort told Reuters.

Disney, whose empire spans TV, film, merchandise and theme parks, is exploring cutbacks in jobs no longer needed because of improvements in technology, one of the people said.

It is also looking at redundant operations that could be eliminated after a string of major acquisitions over the past few years, said the person, who did not want to be identified because Disney has not disclosed the internal review.

Executives warned in November that the rising cost of sports rights and moribund home video sales will dampen growth.

In terms of profit margin, Disney's studio is the least profitable of the entertainment conglomerate's four major product divisions.

Its fifth division, the interactive unit that creates online games, lost $758 million over the last three years, according to the company's financial filings.

Disney could trim jobs at both the studio and interactive divisions as well as its music arm, said Tony Wible, an analyst with Janney Montgomery Scott, who has a neutral rating on the company's stock.

The media company is in what CEO Bob Iger calls a "transition year" after spending on projects such as the "Cars Land" expansion at the Disneyland Resort in California and a new cruise ship that launched last year.

"We invested a lot of money in our theme parks and resorts business," Disney chief financial officer Jay Rasulo told a media conference in December. "We want to execute against delivering the returns that we've been promising all of you for the years that we've been making those investments. We really want to hunker down on it."

Staff cuts are not a certainty at this point, the person added, although the company has a history of streamlining operations through layoffs.

In 2011, the interactive group laid off about 200 people at its video games unit after what Disney executives said at the time was a shift away from console games to focus on online and mobile entertainment. In September, 50 employees at Disney Interactive were laid off in a restructuring of the money-losing unit, according to one of the sources.

The company also made cuts at its publishing unit last year, and cut workers at its studio in 2011.

"This is not necessarily a negative thing," said Michael Morris, an analyst with Davenport and Company who has a buy recommendation on the stock but was not aware of the review.

"It speaks to a fiscally responsible management."
STUDIO COULD BE TARGET
Walt Disney increased its earnings by 18 percent to $5.7 billion in its 2012 fiscal year that ended September 29, on $42.3 billion in revenues.

The present review, headed by CFO Rasulo, has already identified areas to change in the company's travel policy, said one of the people. It is also looking at a hiring freeze rather than layoffs, said a second source.

Cuts are most likely at the studio, said two of the three people, where the strategy has changed to focus on fewer films and rely more on outside producers such as Steven Spielberg's Dreamworks studio, which finances its own films and pays Disney a fee to market and distribute them.

The film strategy shift began when Iger took over as CEO in late 2005. Under Iger, the company purchased "Toy Story" creator Pixar Animation and Marvel, which brought it characters such as "Thor" and "Iron Man" that featured in this summer's blockbuster hit "The Avengers."

Disney completed a $4.06 billion acquisition of "Star Wars" creator George Lucas' Lucasfilm in December, and has said that it will begin producing new installments of the lucrative franchise in 2015, and make a film every two to three years.