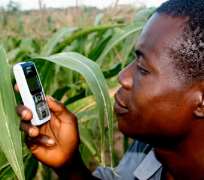 N-Katalyst notes with concern the announcement by the Federal Government to spend sixty billion Naira to purchase ten million phones for farmers. We appreciate government efforts in empowering Nigerian farmers but we believe this might not be the best way to get value for money that is invested to promote agriculture. First, the proposed cost per telephone is higher than the going rate in the market. Secondly, why are we starting with a huge contract instead of developing the on-going electronic wallet system for fertilizer distribution? Thirdly, what research has been done to show that there are ten million farmers who need to be supplied with cell phones?

There are 110 million cell phones in Nigeria and most of those willing and capable of using it already possess them? Has anybody asked the farmers whether they want free handsets which most of them already have or some other enabling arrangement such as subsidized or free air time? Finally, has government considered what 60 billion Naira can do in the area of storage facilities, farm implements, roads, pest control etc before deciding to channel such huge amount to give out a mega contract that at the end of the day will only benefit those giving out the contract?

The use of phones for agricultural purposes is not new. Small holder farmers in different African countries - Ghana, Senegal, Rwanda, etc, are making use of it in sharing information such as extension services, market information etc. In Nigeria, it is already in use by some farmers. In Dawanau grains market in Kano, (the biggest in West Africa), farmers and traders have access to regional market information. They used a specialized package for such information sharing across West Africa. It is such programmes on developing programmes for farmer’s benefit that Government should place its attention on rather than on purchasing the hard ware.

Following a spate of criticisms at Government plans on this matter, the Minister of Agriculture issues a clarification that has not clarified anything. He said his permanent secretary was misquoted and he has not approved 60 billion Naira for the purchase of the phones. He argued that Government policy is “to get mobile phones to farmers, as part of its agricultural transformation agenda, to connect farmers to information, expand their access to markets, improve their access to savings and loans, and help them adapt to climate change dynamics that affect them and their livelihoods.” He added however that the bulk of the 110 million cell phones in Nigeria are in the urban areas. He then clearly stated that from 2013, government intends to distribute 10 million phones to farmers which will be financed through a MoU signed between the Ministry of Finance, Ministry of Communications Technology and the Ministry of Agriculture and Rural Development, with the Ministry of Women Affairs. Out of the 10 million phones, 5 million will go to women he added. This means that the contract for the purchase and distribution of the phones will go ahead.

The plan by government to spend 60 billion Naira to purchase 10 million phones shows clearly the limitations of government approach to policy making in general and how this particular policy decision has not been thought through. The Nigerian state needs to think more seriously about the relative value of policy options and the buy in of beneficiaries before she jumps to large contract giving "solutions". In a policy of this nature, government must talk to real farmers in villages and not sit in the office and look for an opportunity for a large contract award that does not proffer solutions to the real challenges being faced. Spending such huge resources on mobile phones by a ministry with one of the least resource allocation in the 2013 budget is unacceptable.

Meanwhile, what happen to the WB rural telephony project? The reason for that project was to serve agricultural purposes; huge resources have been invested in the last decade. Rather than spending all this money on cell phones, one option is for Government to speed up the implementation of a fee-free license for community radio so that farming communities could establish community radio stations that could, among other things, provide them access to market information as well as a voice to contribute to national dialogue.

N-Katalyst calls on the Government of President Goodluck Jonathan to desist from such a policy that misplaces priorities and encourages wasteful spending especially at a time government wants to borrow money to implement development projects. We also call on the National Assembly as a matter of urgency to prevail on President Goodluck Jonathan to stop the Minister of Agriculture immediately as it sends wrong signals to other countries that Nigeria does not see anything wrong in wasting her resources on misplaced priorities.