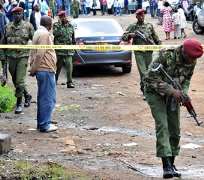 The attack occurred in the early evening in a restaurant in the Dadaab camp, home to nearly half a million refugees, the vast majority of them Somalis, District Commissioner Albert Kimathi was quoted by Reuters as saying.

"Two people are dead. We are yet to establish the motive of the attack and no arrests have been made so far," Kimathi said.

Bombings, shootings and grenade attacks across the country, blamed by many Kenyans on Somali militants, prompted the government last month to stop registering asylum seekers and refugees in urban areas.

Violence has surged in Kenya, the region's biggest economy, since Nairobi sent troops into Somalia more than a year ago, raising fears of insecurity ahead of a general election in March.