THE ZERO DEVELOPMENT BUDGET RITUAL OF THE NIGERIAN GOVERNMENT 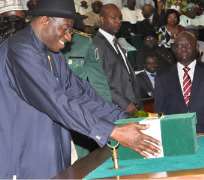 In 2013, the sum of N 4.987 trillion shall be spent by the federal government of Nigeria. The capital expenditure is a paltry N 1.6 trillion, which is 32 per cent of the entire budget. But more worrisome is the established tradition of woeful implementation of budgets by the PDP governments since 2007. If the capital component of budgets in Nigeria was prudently implemented the country would have efficient public development infrastructure such as roads, railways, electricity, water supply networks, refineries, etc., which could drive down the cost of production, expand capacity utilization of manufacturing industries, preserve life, and reduce unemployment rate. The Nigerian on the street finds nothing or little to cheer in the yearly rituals.

There is a trend that must be pointed out. The Nigerian legislature has joined the choir of national lamentation rather than check the excesses, impunity, and negligence of the executive. The lawmakers do not presently retain the respect of President Jonathan and his government. The resolutions or motions of either the senate or House of Representatives are treated with disdain.

They have been referred to as “mere opinions” by the presidency without any sanctions. The threats by the national assembly have turned out to be just pitiable bluffs. They had demanded 100 per cent implementation of the 2012 budget by September, 2012 or some sanctions would be delivered by it on the executive. Besides being unreasonable to demand 100 per cent implementation of a budget only in the third quarter of a year and when the commencement of implementation was supposedly in the second quarter of the same year, the national assembly ridiculed itself again as that deadline came and passed without as much as a whimper from that supposedly august body of serious lawmakers. The Nigerian people have spent so much of their resources and expectations on the national assembly with nothing to show for it. They have become an assembly of weaklings whose words mean nothing.

There is no democracy without an effective and productive legislature. What victories has the current national assembly won for the Nigerian people since May, 2011? Trillions of naira have been spent on “fuel subsidy” by the executive without appropriation, yet the national assembly has failed to react strongly. The Nigerian people were forced, in spite of the lame protestation of the legislature, to pay 50 percent more for petrol in 2012, yet, the senate, toward the end of 2012, approved additional N 161.6 billion for Jonathan to spend on fuel subsidy payments, bringing the total expenditure on fuel subsidy in 2012 to N 1.06 trillion! The national assembly only whines about amounts that the executive requests it to approve for funding; but in the end, they are approved however indefensible! They have failed to punish; they have failed to bite. They are simply the rubber stamp of the executive. When the national assembly grandstands publicly, it is only a matter of time before the legislators defer to the lusts and greed of the executive.

The 2013 budget has passed without any significant mopping up of the fatty inclusions by the executive that added no real value. I agree that the recurrent expenditure has been pruned down by N 100 billion, and the savings have been assigned to capital expenditure. I agree that the crude oil benchmark has been raised from $ 75 to $ 79, which has reduced deficit spending from N 1.03 trillion to N 887 billion. But what is strange is that nothing in either the budget proposal by the executive or the budget appropriation by the legislature has addressed a huge source of bleeding on the commonwealth. There is no provision in the budget for building of refineries. If in spite of the reduction of fuel subsidy spending in 2012, Nigeria spent more than one trillion naira on the subsidy, it should be a matter of concern to the national assembly that Nigeria does not own refineries that can refine both for domestic and foreign markets. It is not a secret that some legislators and the executive would like the scrapping of fuel subsidy because of “corruption in its implementation.” This is an open confession of the incompetence of the Jonathan government. If a government cannot defend the people against economic predators then it has outlived its usefulness. Should the 2004 pension act be abrogated and pension payment outlawed in Nigeria only because of the corruption that has been perpetrated in the management of the pension fund? Should government departments where corrupt practices have been established be scrapped then?

What is the philosophy that guided the formulation of the 2013 budget? I heard that President Jonathan was hopeful that 2013 would be “better than 2012”, with the assurance that jobs would be created. If jobs are going to be created we should find evidence in the 2013 budget:

Public works
All federal roads in Nigeria are in a terrifying state of disrepair. Road contracts in Nigeria are inflated beyond shame or restraint of natural conscience. A road that is less than 100 kilometers long could be awarded for N 100 billion! Well, going by this obscene tradition of contract costing, the N 1.6 trillion voted for capital expenditure in the 2013 budget cannot complete even 2000 kilometer-length of roads (Do pardon the many kilometers I have stated). This should be considered against the background that there are about 30,000 kilometers of federal roads in Nigeria, almost all of which are dotted by yawning craters, broken bridges, and sharp-edged polygonical ditches. The state of the most important road in Nigeria (The Lagos-Ibadan expressway) should tell us about the comedy of governance in this “Giant of Africa”. Maiduguri-Yola-Jalingo-Gboko-Otukpo-Enugu federal road is a disaster to drive on. Enugu-Port Harcourt federal road is legendary in the tale of failed governance. Ayangba-Ajaokuta-Okene road is a national disgrace. Ibadan-Ilorin-Abuja-Kaduna road is not better. Ore-Benin road has become a singsong without a beautiful end. I can go on. What economy can a government hope to build where road transportation has been so neglected in spite of yearly budget rituals?

I have read about the chest-beating by the federal government that it has revived rail commute between Lagos and Kano on the colonial era single tracks that we used during our student days in the 1980s. The cars used on those tracks are so outdated and uncomfortable in the tropical heat.

This is not how to build a nation. In an age of fast-moving air-conditioned cabin cars on rail, the Jonathan government is hypocritically siphoning public funds in the name of “rehabilitation of colonial-day railways”, being part of a government that had cancelled a contract for the construction of a dual track railway, which project would have been completed in 2010, and on which trains should have travelled at 160 kilometers per hour, and at a time when Nigeria had more than 20 billion US dollars in the Excess Crude account!

The aviation industry is in a trauma of its own. Many lives have been claimed through plane and helicopter crashes in 2012 alone. The summary is that transportation in Nigeria is a frightening experience. Now, where will job-creating investments come from when transportation has become a trap in Nigeria? The 2013 budget may likely go the way of previous budgets with no significant accomplishments.

Legislative oversight functions
Available evidence has shown that we do not yet have a legislature that is principled and dogged enough to make the executive succumb to good sense in managing of public resources. How can a group of contract-chasing legislators ensure effective implementation of budgets? Failure of both implementation of yearly budgets and sanctioning of corrupt and incompetent public officials offer little hope that the 2013 budget will be any different. What kind of transformation have Nigeria’s legislators and the executive undergone to assure Nigerians of “better things in 2013”? The greed, lack of empathy, and the cavalier attitude towards legacy building by Nigeria’s public officials tell us the story of the 2013 budget. It sounded awful but familiar, and it changed nothing except worsen things.

It is my strong conviction that nothing changes that is left the same. What is so different about the 2013 budget that should excite? Well, some would respond that the “early passage of the budget would allow the executive enough time to implement.” I have a question, then. Has late appropriation of previous budgets been the true cause of poor implementation of past budgets, averaging only 40 per cent? Deliberate delay in allocation of funds to ministries, departments, and agencies has stifled execution of capital projects in the past. Poor and duplicitous supervision by relevant legislative committees is another reason for poor implementation of past budgets. Lack of punishment of contractors of failed or failing and abandoned projects and their collaborating civil servants has only emboldened impunity. What assurances do we have that things would change? Better still, what evidence do we have that the government of President Jonathan is ready to protect the commonwealth? Let me say why I believe Jonathan’s government will only get worse.

A government that pays little attention to matters of principle, integrity, reputation and perception cannot succeed. Mr. Tony Anenih who has been accused, from the time when Mr. Orji Kalu was a governor, of embezzling billions of naira budgeted for construction of federal roads when he was Minister of works, has just been appointed by Mr. Jonathan as chairman of the Nigeria Ports Authority. Mr. Doyin Okupe, whom the Benue state government has accused of collecting money to build roads in the state, which he failed to do, is presently serving in the government of the president. The current Minister of Petroleum supervises the NNPC and DPR, both of whom have been fingered in the mismanagement of the fuel subsidy funds. Yet, she sits pretty well in her job without compunction. The report of an investigative panel pretentiously set up by her with regard to oil revenues has been consigned to the bin. These are no cheering signs.

The Nigerian people can only rely on people power to pressure the government towards the desired course. It takes being purposeful and consistent. It requires Nigerian elite who have refused to be soiled to lead the struggle. Nigerians don’t need elite who were on the other side of the oppressors, who now being shut out have suddenly become civil rights activists. But the people can only get what they deserve. Their courage tells when they are deserving of the desired.