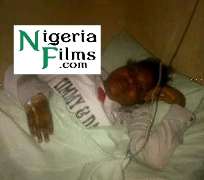 The Association of Theatre Arts Practitioners (ANTP) is leaving no stone unturned in making sure the burial of its colleague, Bisi Komolafe is properly done. Even though her death was painful, the association in a long time, are united this time around in drumming support for the families of Bisi.

Nollywoodgists.com reliably gathered from some top members of ANTP that almost all members are one in the cause of Bisi's burial. Even though some members are trying to take advantage of the burial to milk some unsuspecting fans and the public by demanding for unnecessary money, the association quickly dealt with that.

Like the branded T-shirts made for her burial was almost being used as an avenue to rake money by some, but some else later paid for the printing of the branded T-shirt. Also, Ijanuade, Bisi's would-have-been husband, provided for the major expenses of Bisi's burial which almost left the association with little to pay for.

Bisi would be buried today in Ibadan.