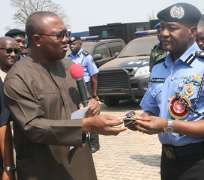 In  fulfillment of his promise to make security of lives and property the priority of his Government in 2013,  Anambra state Governor, Peter Obi yesterday presented 3 armoured and 50 patrol vehicles to the Police at the Governor's Lodge, Amawbia, making it over 350 he has so far presented to security organizations in the State.

During the presentation, Obi said that other security agencies would receive theirs and assured the Police of the continued support from Anambra State. He says: 'May I reassure the Inspector General of Police and the entire Police that Anambra State will continue to work with them for the security of the State and the country at large. We enjoin all Nigerians to do same.'
Explaining the reason for the gesture, Obi said it was out of his belief that the State needed security to sustain her achievements and record even more, which will not be possible in the atmosphere of insecurity.

Earlier, the Inspector General of Police, Muhammed Abubakar, who said he was in the State to appraise security situation, received the keys to the vehicles from the Governor Obi. He thanked him for his commitment to security saying that each time the Governor visited him in Abuja, it must be on how to improve the security of his people. He said he was also happy on coming to Anambra because the State had remained an example of how other states ought to support security agencies for the good of the country. He also commended Obi for his contributions to the re-positioning of the police through his membership of the Police Funding Committee.

Comparing Anambra of the past and that of today, he said that under Governor Obi, the State had moved from her ugly past and had become more peaceful, secured, stable, progressive and safe.

While commending Obi and the Anambra Police Command for their efforts at security, the IG disclosed that the Police have posted more 500 of her personnel to Anambra and hinted the possibility of establishing more Area commands in the State for efficient and effective policing of the State. He also reiterated his commitment to a safer Anambra. He said that going by the nature and extent of support the Police in Anambra were enjoying from the Gov, that there was no reason for them to fail.

Later, the Governor took the Inspector General of Police to Innoson Vehicle Manufacturing Company, Nnewi, where he inspected the plant, including the 300 security patrol vehicles ordered and paid for by Anambra State Government to be distributed to the communities in the State.

Speaking to the press, the Inspector General who was impressed with what he saw, said that he would look at the vehicles manufactured at the industry in terms of suitability for security purposes for them to patronize it.