GOV. IDRIS WADA, HIS LEG, AND OUR LEGS 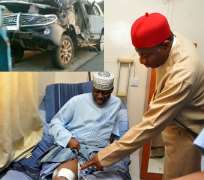 The antics of the monkey will eventually be his undoing when he jumps from one tree to another playfully until he falls to his death.

Just looking at pictures of Jonathan's visit to Kogi state governor at a private hospital in Abuja set me thinking in this new year.

Very quickly, let me say that this year, I will talk, I will write, I will agree, I will disagree, I will learn, but I won't relent on the conversation. I will in my little way speak truth not just to power but to those without power.

I intend to recruit more people to the discuss using the only medium available, for me, I will be guided by the motto: no one is more Nigerian than us. My admonitions will preach oneness, it will address our differences. I will hurt us, not with arms, but the truth...this will be the little summary of my creed for this year 2013.

Having stated the above, back to my admonition today.

Idris Wada, is controversial PDP governor of Kogi state, even his party was/is against him. I recall he was same person that documents made round questioning his sanity. He has been at loggerheads with the state House of Assembly while there has been a speakership tussle.

Only recently a former governor of the state was on the run from EFCC, another governor was a carpenter with questionable educational qualification.

Idris Wada, was a victim of a motor accident, a Lexus bullet proof luxury 4X4, this and that proof but not accident proof. He completed the list of governors with misfortunes for 2012.

So let us rewind, after an event in some part of the state, he was driving back when the one of tyres of the car burst and the rest is story. He survived with a broken leg or thigh one and minor wounds on other parts of his body.

His ADC was not that lucky, he paid the ultimate price. May his soul find peace.

So how does Idris Wada's leg matter or mean a thing to you or anyone at that? Before I tell us, let me wish him a quick recovery.

However I am happy that it is Idris Wada's leg, wish it was more...very crude and wicked of me to wish him such. Sadly these are the thoughts of many Nigerians who have lost loved ones due to the reckless driving of government convoys. Many who have broken any part of their bodies can't wish Wada any well.

The truth is that a first look at the accident-ed car tells you the speed it was being driven at. It is almost as if these government drivers, their boss and the convoy are hell-bent on a suicide mission.

Where are the often speeding to, is the place leaving that location? Why is it that government convoys from local to presidential cannot obey traffic rules and why are they in a hurry to break our legs, hands, heads, flog us, and push us out of the roads.

The same us they claim voted them, same us, they insist they are serving.

While I looked at the picture of Idris Wada's encased leg as Jonathan 'greeted' him. I counted the many Nigerian legs, the many Kogi legs that cannot get such treatment as our governor was getting.

The governor was humble enough (maybe PR) to say he was not going to Nigeria's 37th state i.e Germany for further treatment. But really how many Nigerian legs could afford that private hospital in abuja, infact, how many Nigerians can get to the national hospital abuja. Can the hospital cater for Nigerians?

Why can we not have 36 first class medical facilities in Nigeria and specialist hospitals across major cities. Why can't simple DNAs, kidney transplants, CT scans be done just about anywhere. Why must CS operations cost as much as N70K?

Is it not true that Igbobi is about the only Orthopedic Hospital we have, the rest being renowned Orthopedic professionals scattered across the nation and Nigerians barely left at the mercy of local 'bone setters'. So what happens if and when its my leg or your leg.

Its 2013, I dare hope, infact I wish I wake to a government convoy driving at barely a 100km an hour, on good roads.

Hence according to Gowon, the money is not the problem, but how to spend it--I suggest that we spend some few millions to building a first class health facility for broken hands, broken heads, hearts, and importantly for broken legs of ordinary Kogites, and Nigerians, then we will know that Idris Wada has learned from the accident, then we will know that government means business, until then--only time will tell.