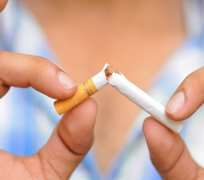 SAN FRANCISCO, January 02, (THEWILL) - British researchers into cigarette smoking have concluded that those who quit the habit feel less anxious afterwards as against the general belief that smoking relieves stress.

According to the researchers, it found ‘a "significant" decrease in anxiety levels among the 68 smokers who had quit after six months.

The effect was greater among those who had mood and anxiety disorders than those that smoked for pleasure.’

The researchers from Cambridge, Oxford and King's College among others in London – “said the findings should be used to reassure smokers attempting to quit that concerns about increased anxiety levels were unfounded.”

According to the report, a failed attempt to stop seemed to increase anxiety levels by a modest degree among those who had mood disorders while those who smoked for pleasure a relapse did not alter anxiety levels.

The researchers said it seemed “that smokers - particularly those that smoked to cope - were more likely to have a cigarette soon after waking up to stave off withdrawal symptoms, which include anxiety.

By quitting, they removed these repeated episodes of anxiety and felt less anxious as a result,” they added.