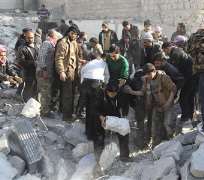 More than 60,000 people have died in Syria's uprising and civil war, the United Nations said on Wednesday, dramatically raising the death toll in a struggle that shows no sign of ending.

In the latest violence, dozens were killed in a rebellious Damascus suburb when a government air strike turned a petrol station into an inferno, incinerating drivers who had rushed there for a rare chance to fill their tanks, activists said.

"I counted at least 30 bodies. They were either burnt or dismembered," said Abu Saeed, an activist who arrived in the area an hour after the 1 p.m. (1100 GMT) raid in Muleiha, a suburb on the eastern edge of the capital.

"The number of casualties is much higher than we expected and is truly shocking," she said. "Given that there has been no let-up in the conflict since the end of November, we can assume that more than 60,000 people have been killed by the beginning of 2013."

There was no breakdown by ethnicity or information about whether the dead were rebels, soldiers or civilians. There was also no estimate of an upper limit of the possible toll.

Previously, the opposition-linked Syrian Observatory for Human Rights monitoring group put the toll at around 45,000 confirmed dead but said the real number was likely to be higher.

FATAL RUSH FOR PETROL
Muleiha, the target of Wednesday's air strike, is a residential and industrial area in the eastern Ghouta region of Damascus that also houses a Syrian air defense base.

Video footage taken by activists showed the body of a man in a helmet still perched on a motorcycle amid flames engulfing the scene. Another man was shown carrying a dismembered body.

The video could not be verified. The government bars access to the Damascus area to most international media.

The activists said rockets were fired from the base at the petrol station and a nearby residential area after the air raid.

"Until the raid, Muleiha was quiet. We have been without petrol for four days and people from the town and the countryside rushed to the station when a state consignment came in," Abu Fouad, another activist at the scene, said by phone.

In Damascus, President Bashar al-Assad's forces fired artillery and mortars at the eastern districts of Douma, Harasta, Irbin and Zamlaka, where rebels are active, activists living there said.

Assad's forces control the centre of the capital, while rebels and their sympathizers hold a ring of southern and eastern suburbs that are often hit from the air.

The Observatory said a separate air strike killed 12 members of a family, most of them children, in Moadamiyeh, a southwestern district near the centre of Damascus where rebels have fought for a foothold.

The family of an American freelance journalist, James Foley, 39, said on Wednesday he had been missing in Syria since being kidnapped six weeks ago by gunmen. No group has publicly claimed responsibility for his abduction.

Syria was by far the most dangerous country for journalists in 2012, with 28 killed there.

The conflict began in March 2011 with peaceful protests against four decades of Assad family rule and turned into an armed revolt after months of government repression.

Insurgents trying to topple Assad see his air power as their main threat. They hold swathes of eastern and northern provinces, as well as some outlying parts of Damascus, but have been unable to protect their territory from relentless attack by helicopters and jets.

In the north, rebels, some from Islamist units, attacked the Afis military airport near Taftanaz air base, firing machineguns and mortars at helicopters on the ground to try and make a dent in Assad's air might, the Observatory said.

The al Qaeda-linked al-Nusra Front, Ahrar al-Sham Brigade and other units in northwestern Idlib province were attacking the base, which is near the main north-south highway linking Damascus to Aleppo, Syria's biggest city, the Observatory said.

The Observatory's director, Rami Abdelrahman, said the attack was the latest of several attempts to capture the base. A satellite image of the airport shows more than 40 helicopter landing pads, a runway and aircraft hangars.

Syrian state media gave no immediate account of the Damascus air strikes or the fighting in the north.

"FOR GOD'S EYES"
Both sides have been accused of committing atrocities in the 21-month-old conflict, but the United Nations says the government and its allies have been more culpable.

Reuters could not verify the provenance of the footage or the identity of the perpetrators and their victims. The video was posted on Tuesday but it was not clear where or when it was filmed. However it does clearly show a summary execution and torture, apparently being carried out by government supporters.

At one point, one of the perpetrators says: "For God's eyes and your Lord, O Bashar," an Arabic incantation suggesting actions being carried out in the leader's name.

The video was posted on YouTube by the media office of the Damascus-based rebel First Brigade, which said it had been taken from a captured member of the shabbiha pro-government militia.

The perpetrators show off for the camera, smiling for close-up shots, slicing at the victims' backs, then stabbing them and bashing them with large slabs of masonry.

Syria's civil war is the longest and deadliest conflict to emerge from uprisings that began sweeping the Arab world in 2011 and has developed a significant sectarian element.

Rebels, mostly from the Sunni Muslim majority, confront Assad's army and security forces, dominated by his Shi'ite-derived Alawite sect, which, along with some other minorities, fears revenge if he falls.