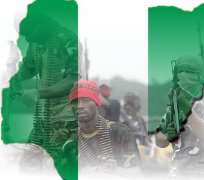 Criminal Minds is an American police procedural television program. The series follows a team of profilers from the FBI's Behavioral Analysis Unit (BAU) based in Quantico, Virginia. The BAU is part of the FBI National Center for the Analysis of Violent Crime. The show focuses on profiling the criminal, rather than the crime itself. They analyze the nation's most dangerous criminal minds in an effort to anticipate their next moves before they strike again.

It is a privilege, a rare one to be alive in a nation that recorded all forms of avoidable violent deaths almost every week of the year...Optimistic commentators and citizens may argue that it could have been worse and at least it was not as bad as painted, some continually have argued that all is well.

But while we cannot run away from realities, we have gone through a year largely of the criminals...and if 2013 is to be any different, we have to make a very conscious, determined effort on profiling the criminal, rather than the crime itself, analyzing the nation's most dangerous criminal minds in an effort to anticipate their next moves before they strike again or else 2013 would be terrible.

In this last admonition and farewell to the year 2012, I will just ask us to reflect on what I call the reality of criminal minds everywhere.

Alhaji Bola Ahmed Tinubu ex-rays the effect of the criminal minds on the Nigerian masses “The situation our country is in today is both sad and unacceptable. We are as a people without a leader, a country with no trustworthy men at the helm of affairs, and a nation now lost at sea.

Our leaders must commit to a better country, not tomorrow, but beginning now – today, because time is not on our side and the continued patience of the people may no longer be guaranteed.”

Last week Professor Mbibu Hyacinth, a surgeon and head of Surgery in ABU, Zaria was victim of common criminal minds, not assassins or BH, sources confirm he was killed while returning from his clinic around a black spot that, a security guard of the university was killed same week.

Imagine how much it took to raise the fine gentleman and doctor and what has been lost, he was one of the best in his field.

General Olusegun Obasanjo, a man who knows how criminal minds work recently said. “I am afraid--and you know I am an army General. When a General says he is afraid, that means the danger ahead is real and potent. The danger posed by an army of unemployed youth in Nigeria can only be imagined.

There is absence of serious, concrete, realistic, short and long term solution to youth unemployment. Nigerian youths have been patient enough. This patience will soon reach its elastic limit. Nigeria will witness a revolution soon unless government takes urgent steps to check growing youth unemployment and poverty”.

Same week at Aku, Igbo-Etiti Local Government Area of Enugu State, US returnee, Ogbo Edoga was killed by gunmen. "The economist was trailed to the house of one of his kinsmen, from where the two assailants, accosted him and shot him at point blank. Family sources said the deceased returned to Nigeria to attend a meeting of Nsukka professionals based in United States, geared towards raising funds for the construction of an ultra-modern medical diagnosis centre to be built at Ede Oballa community in the area".

Online commentator Cornelius is apt when he says “Nigeria is worse today than it was during the civil war. At least then, you knew who your enemies were, where, possibly when and why they are going to strike, you make adequate arrangements to respond. Today, you have no clue who is going to strike, why they are going to strike you and the lethality of their anger. Worse still, everyone and everything seems to be at the game for different reasons. The gateman, the clerk, the police officer, the army, the airforce, your brothers and sisters, the elected leaders, the tribalists, etc. The nation and its people are boiling over and over and no one seems to be leading. It is at war with itself.”

In another breath several scores were feared killed and inmates set free when unknown gunmen, struck in Maiha, Adamawa state. The Divisional Police station, the prison, the Customs area office, the presidential lodge, all located at the local government headquarters were completely razed, with heavy artillery they came in 'motorcycles' and foot'.

According to a paper report The Adamawa State Commissioner of Police, Godfrey Okeke confirming the incident said, “Nobody should disturb me now, already I am in Maiha, and you people should allow me to rest.”

The Department of State warned U.S. citizens of the risks of travel to Nigeria …because of the risk of kidnappings, robberies, and other armed attacks...Canada did same, even little Taiwan was not left out.

In the East of the Niger, kidnap became a-per-second-billing business, with no exact figures as to how much was made by the criminal minds from un-receipted payments on returns on investment. While many kidnap deals were with-figures undisclosed, actress and aide to Gov. Rochas of Imo state, Nkiru Sylvanus parted with N8M. In the South West, you are not just kidnapped but literally stolen...and accidents on the Sagamu, Ibadan-Lagos express road account for over half a thousand deaths.

The problem of criminal minds that ruled the terrain in 2012 is not just Boko Haram, there were several harams, poor people were left battling Sanusi on N5000 Note haram, we also witnessed the January occupy Haram, the nation was held ransom by subsidy cabal haram.

We almost forgot Farouk and Femi haram, all the blasts and bombs harams, Oteh haram of SEC, the Alu and Mubi Harams, the Cynthia facebook killing haram…

No criminal mind was convicted/punished for violent crime, we just moved in circles, and with failed promises. Will be 2013 be the year where we get water to quench these fires...time will tell.