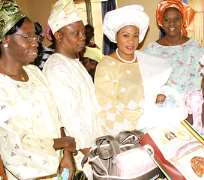 Wife of the Governor of the state of osun, Mrs sherifat Aregbesola, has counselled against the practise of female genital mutilation in order to enhance the health of women and girl child in the State.

Speaking at Ode Omu,Maternity centre Iwo as part of her visits to a number of babies born on the new year day, Mrs Aregbesola stated that the practise of genital mutilation was a dangerous one which all stakeholders should collaborate in stopping.

She led a team of state officials to make some presentation of gift items at Hospitals at Iwo,  Osogbo and Ode-Omu to usher in 15 new babies born early New year day.

Mrs Aregbesola first arrived at the Ijugbe Oja Ale maternity centre Ode Omu in ayedaade local government area of the  state where the first baby of the year 2013 was delivered around 12.01am on the new year day.

The child, a baby boy, with net weight  of 3.3kg was born to Mr and Mrs Odekemi of Ode Omu,osun state.

While responding on behalf of the parents of the babies of the year 2013, Mr and Mrs Odekemi appreciated the wife of the Governor for her kind gesture to all the beneficiary of gift items