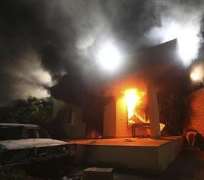 The State Department made a "grievous mistake" in keeping the U.S. mission in Benghazi open despite inadequate security and increasingly alarming threat assessments in the weeks before a deadly attack by militants, a Senate committee said on Monday.

A report from the Senate Homeland Security Committee on the September 11 attacks on the U.S. mission and a nearby CIA annex, in which the U.S. ambassador to Libya and three other Americans died, faulted intelligence agencies for not focusing tightly enough on Libyan extremists.

It also faulted the State Department for waiting for specific warnings instead of improving security.

The committee's assessment, "Flashing Red: A Special Report On The Terrorist Attack At Benghazi," follows a scathing report by an independent State Department accountability review board that resulted in a top security official resigning and three others at the department being relieved of their duties.

Joseph Lieberman, an independent senator who chairs the committee, said that in thousands of documents it reviewed, there was no indication that Secretary of State Hillary Clinton had personally denied a request for extra funding or security for the Benghazi mission. He said key decisions were made by "midlevel managers" who have since been held accountable.

Republican Senator Susan Collins said it was likely that others needed to be held accountable, but that decision was best made by the Secretary of State, who has the best understanding "of how far up the chain of command the request for additional security went."

The attacks and the death of U.S. Ambassador Christopher Stevens put diplomatic security practices at posts in risky areas under scrutiny and raised questions about whether intelligence on militant activity in the region was adequate.

The Senate report said the lack of specific intelligence of an imminent threat in Benghazi "may reflect a failure" by intelligence agencies to focus closely enough on militant groups with weak or no operational ties to al Qaeda and its affiliates.

"With Osama bin Laden dead and core al Qaeda weakened, a new collection of violent Islamist extremist organizations and cells have emerged in the last two to three years," the report said. That trend has been seen in the "Arab Spring" countries undergoing political transition or military conflict, it said.

NEED FOR BETTER INTELLIGENCE
The report recommended that U.S. intelligence agencies "broaden and deepen their focus in Libya and beyond, on nascent violent Islamist extremist groups in the region that lack strong operational ties to core al Qaeda or its main affiliate groups."

Neither the Senate report nor the unclassified accountability review board report pinned blame for the Benghazi attack on a specific militant group. The FBI is investigating who was behind the assaults.

President Barack Obama, in an interview on NBC's "Meet the Press" on Sunday, said the United States had "very good leads" about who carried out the attacks. He did not provide details.

The Senate committee said the State Department should not have waited for specific warnings before acting on improving security in Benghazi.

It also said it was widely known that the post-revolution Libyan government was "incapable of performing its duty to protect U.S. diplomatic facilities and personnel," but the State Department failed to fill the security gap.

"Despite the inability of the Libyan government to fulfill its duties to secure the facility, the increasingly dangerous threat assessments, and a particularly vulnerable facility, the Department of State officials did not conclude the facility in Benghazi should be closed or temporarily shut down," the report said. "That was a grievous mistake."

The Senate panel reviewed changing comments made by the Obama administration after the attack, which led to a political firestorm in the run-up to the November presidential election and resulted in U.S. Ambassador to the United Nations Susan Rice withdrawing her name from consideration to replace Clinton, who is stepping down early next year.

Rice had said her initial comments that the attack grew out of a spontaneous protest over an anti-Islam film were based on talking points provided by intelligence agencies.

Lieberman said it was not the job of intelligence agencies to formulate unclassified talking points and they should decline such requests in the future.

The report said the original talking points included a line saying "we know" that individuals associated with al Qaeda or its affiliates participated in the attacks. But the final version had been changed to say: "There are indications that extremists participated," and the reference to al Qaeda and its affiliates was deleted.

The report said that while James Clapper, the director of national intelligence, had offered to provide the committee with a detailed chronology of how the talking points were written and evolved, this had still not been delivered to Capitol Hill because the administration had spent weeks "debating internally" whether or not it should turn over information considered "deliberative" to Congress.