Hours From 'Fiscal Cliff,' Still No Deal In Congress 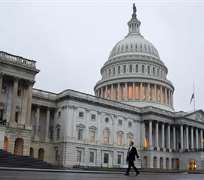 Taxes were on track to rise for many Americans this week unless lawmakers could cut a last-minute deal on Monday to avoid the "fiscal cliff," an outcome that seemed unlikely, but still possible.

Financial markets were on edge only hours before the midnight arrival at the long-awaited "cliff," an assortment of $600 billion in tax hikes and broad federal spending cuts on defense and domestic programs that has defied a political solution.

Any resolution in the tug-of-war over taxes and spending cuts forged in the Senate would need to win approval in the House of Representatives and the outcome in that chamber was uncertain.

"Republicans in the House do not want to raise tax rates without some significant spending cuts, and the Senate apparently has abandoned" a proposal to trim cost-of-living adjustments in the Social Security pension program, said Greg Valliere, chief political strategist at Potomac Research Group.

"So, while the Senate stumbles toward a potential compromise, there's absolutely no assurance that it could pass later this week in the House," he said.

Still, a serious jolt from the markets could prod Democrats and Republicans into action, even at the eleventh hour - or in this case, December 31 at 11:59 p.m. EST (1659 GMT).

"I believe investors will show their displeasure" at the lack of progress in Washington, said Mohannad Aama, managing director at Beam Capital Management, an investment advisory firm in New York.

Democratic and Republican leaders in the Senate had hoped to clear the way for swift action on Sunday. But with the two sides still at odds, Senate Democratic leader Harry Reid postponed any possible votes and the Senate adjourned until Monday.

The main sticking point between Republicans and Democrats remained whether to extend existing tax rates for everyone, as Republicans want, or just for income below $250,000 to $400,000, as Democrats have proposed. That threshold may be rising closer to a level of $500,000 or so, analysts said.

Also at issue were Republican demands for larger cuts in spending than those offered by President Barack Obama.

Hopes for a "grand bargain" of deficit-reduction measures vanished weeks ago as talks stalled.

DAIRY PRICES, SANDY RELIEF
Expiring along with low tax rates at midnight Monday are a raft of other tax measures. One is a payroll tax holiday that Americans have enjoyed for two years.

Support for extending this seems to have faded away, in part because the tax funds Social Security. If it ends, the current 4.2 percent payroll tax rate paid by about 160 million workers will revert to the previous 6.2 percent rate after December 31, and will be the most immediate hit to taxpayers.

A "patch" for the Alternative Minimum Tax that would prevent millions of middle-class Americans from being taxed as if they were rich, could go over the cliff. Republicans and Democrats support doing another patch, but have not approved one.

At best, the Internal Revenue Service has warned that as many as 100 million taxpayers could face refund delays without an AMT fix. At worst, they could face higher taxes unless Congress comes back with a retroactive fix.

After Tuesday, Congress could move for retroactive relief on any or all of the tax and spending issues. But that would require compromises that Republicans and Democrats have been unwilling to make so far.

Obama said on Sunday he plans on pushing legislation as soon as January 4 to reverse the tax hikes for all but the wealthy.

The cliff is not the only business on the House agenda. Farm-state lawmakers are seeking a one-year extension of the expiring U.S. farm law to head off a possible doubling of retail milk prices to $7 or more a gallon in early 2013.

Relief for victims of Superstorm Sandy is waiting in line in the House as well, though it could still consider a Senate bill on assistance for the storm until January 2, the last day of the Congress that was elected in November 2010. On January 3, the new Congress opens with members elected in November, and all legislation is sent back to start.