PHCN Sued N50million By Delta Chief For Breach Of Contract 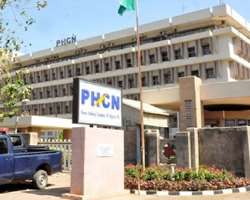 SAN FRANCISCO, December 31, (THEWILL) - The paramount ruler of the Seimbiri Kingdom, Burutu Local Government Area, Delta State HRM Pere Charles Ayemi-Botu (JP) has sued the Power Holding Company of Nigeria (PHCN) for N50m over an alleged breach of an agreement reached between the kingdom and the utility company.

The suit, filed at the Delta State High Court of Justice, Warri, said the defendant sometime in 2011 agreed with the Claimant to install, connect and commission a 300KVA 30/0.415KV transformer in the area. Having reached that agreement, the claimant expended so much money as directed by the defendant who however failed to meet and/or refused to carry out her side of the obligation under the contract, despite repeated demands/request by the Claimant.

In the suit filed as No W/435/2012 at the High Court, the claimant declared that despite repeated reminders to the defendant, he/she persistently refused to install, connect and subsequently commission the aforesaid 300KVA, 33/0.415KV transformer since 2011.

According the paramount ruler, this action by PHCN is unlawful, unconstitutional and therefore seeks “a declaration that the conduct and actions of the defendant in failing to meet her obligations towards the claimant under the forgoing circumstances, constitutes a clear breach of the contract between the defendant and the claimant.”

The writ of summon dated December 6, 2012, is also asking the court for “an order, directing the defendant to forthwith, make a refund of the sum of Two Million, Two Hundred Thousand Naira (N2,200,000.00) so far expended by the claimant under the contract; or alternatively, an order, directing the defendant to forthwith, comply with the terms and conditions of the contract agreement by installing, connecting and commissioning the said 300KVA.33/0.415KV transformer as earlier negotiated and agreed between the parties for purposes of generating the needed power/light in the claimant’s apartment and neighborhood.”

Counsel to the claimant, F.E Seimode (Esq.), said after the various approvals and in compliance with an order from the defendant (PHCN), the claimant paid several sums of money through four separate bank drafts amounting to N407,500:00 on the orders, instruction and/or directive of the defendant to seal the aforesaid contract/transaction adding that the claimant in addition to the four bank drafts, also paid the utility company various sums of money in cash totaling N1,792, 500:00 bringing the sum total to N2,200,000:00 (Two million, two hundred thousand naira) to the defendant (PHCN).

In addition, HRM Pere Charles Ayemi-Botu (JP) said all monies expended were handed over as cash to an official of PHCN, one Darlington Omojero who brokered and/or concluded the entire monetary transaction on behalf of PHCN. However almost a year after the said amount was paid to the company as fulfillment of the paramount ruler’s part of the bargain, the defendant has, contrary to the agreement, refused to carry out her own side of the bargain and instead is demanding an additional N300, 000: 00.

A letter written by the claimant to the Chief Executive Officer (CEO), Benin Electricity Distribution Company (BEDC), Benin City, Engr. (Dr) E. B Umoren, dated October 22, 2012 reminded the power company of her breach of the contractual bargain and also expressed concern that he (claimant) has been waiting on (PHCN) to meet up with her contractual obligation without any positive step being taken to fulfill the said obligation for over a year now.

Having failed to provide the services, the claimant is therefore asking the court to order PHCN to pay him N50m as damages for the inconveniences, pains and/or anguish he suffered on account of the failure of the defendant to carry out her own part of the bargain under the contract to install, connect and commission the said 300KVA.33/0.415KV transformer since 2011 to date.

The claimant is also seeking a declaration that the continuous refusal of PHCN to install, connect and subsequently commission the transformer is unlawful, unconstitutional and therefore null and void according to the agreement and should therefore be sanctioned.

HRM Pere Charles Ayemi-Botu is also asking the court to order that 10% of the damages he is asking for be paid per month until that amount was fully and completely liquidated.