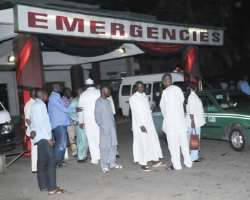 Governor Idris Wada’s driver, Isah, who sustained injuries in last Friday's crash involving the official vehicle of the governor is responding to treatment.

Dr. Attah Ahmed, a consultant, who disclosed this to journalists in Lokoja, Sunday afternoon, said that the driver was in very stable condition.

“The driver is in a very stable condition. He is healing rapidly. He even ate today, there was no problem at all,” he disclosed.

When journalists called at the Specialist Hospital Lokoja, where Isah is being treated, he was said to be sleeping.

It would be recalled that Governor Wada , narrowly escaped death even as his ADC, ASP Idria Mohammed, died on the spot in a ghastly motor accident, which occurred at about 2.30pm on Friday at Elete Emi Woro, between Prime Polytechnic and Salem University in Ajaokuta-Lokoja Government Area of the state.