NDI-IGBO FAILURE IS NOT AN OPTION 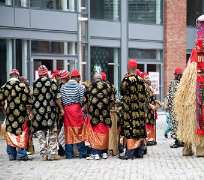 Igbo is one of Nigeria’s main ethnic groups where there are over 250. What is unique about them is the tenacity they display for hard work. These are Africans like any other, so their extra motivation for hard work must come from somewhere else. It is not because other Africans are lazier, indeed there are Africans equally motivated if not more. But the average Igbo is more driven. When anthropologists study a group of people, many times they find what they want including some surprises like any scientific study.

The answer is their indifference to laziness or unsuccessful men usually referred to as efulefu. We saw some of that in Things Fall Apart by Chinua Achebe. Unfortunately, this noble quality may be missing in all Nigerians since the arrival of the Oil curse. Some Nigerians have relaxed and are more interested in easy money as displayed and stolen by their leaders. Yet there are many Nigerians that work too hard to fit into any classification.

However, this does not take anything away from Igbo as we know them in Nigeria and beyond. When we were growing up in Lagos, it was easier for the Igbo man to find jobs than a Yoruba or Hausa man. The closest people that were also industrious were from Calabar area usually called Eteh. But the Igbo distinguished themselves as the most trust worthy and loyal to most of their employers. So a Yoruba man would hire an Igbo man if he wanted his business to prosper.

The Edo, Ijaw and Calabar were more prominent in Western Nigeria before the Igbo but the special attributes displayed by Igbo won them better jobs even before their hosts in many cases. While there are settlements that could be pointed to as mostly Ijebu, Tapa, Edo and Ijaw, there were none for the Igbo except business and trading places.

On top of their enviable qualities is what they do with their money. They spend it wisely. A familiar example is those with High School diploma. It was about 15 pounds per month before and just after the civil war. Out of that 15 pounds, an Igbo man would pay rent of about 5 pounds or less, pay for cloths, food and transport which was about one shilling (12 kobo) to and from work per day. The miracle to us was that they would still send 5 pounds home.

It must be emphasized again that it was not only Igbo men that were that smart since many others from different parts of Nigeria did the same but the Igbo were unique because most of them did it. Those of us living at home, given free food but had to buy our fancy cloths. Since a store like Chellarams might have “double two” shirts for one pound one, that was one guinea or one quid one shilling. We might also buy “Ballee” shoes. In short, by the time we spent on Bar Beach refreshments, Maharani and Sunday Jump, there was little left.

They were so disciplined, almost to a fault. When it came to the time to marry, girl friends if any, were abandoned. There was this man that brought a young beautiful girl from home.

He told us that was his sister that followed him from home to attend high school. Well, most brothers and parents were very protective. We were all after this beautiful girl but only one of us spoke Igbo fluently because his parents were Igbo. He would talk to the girl but we made the mistake of following her home one day. The man came out with a machete, that was his wife!

When we were in primary school, we used to trade curses and most of us knew all the bad words in Hausa, Igbo and Yoruba. For some reason, one Igbo boy was getting more laughs than this writer and he became suspicious. One of his friends later told him it was because all his curses were redirected to his parents in Igbo. From then on we learned that if your opponent was trading more curses than you, redirect them to his parents in Igbo or Hausa. It was fun!

After each session which usually took place during breaks anyway, we would laugh over it and instantly rate one another as the best. The reason this is important to bring out is that young men and women have lost their amicable friendship these days. The types of insults they trade these days are worse than the curses we traded in those days. Even more dangerous is that they become enemies thereafter.

These insults between young men and women either on internet sites or to one another in the open is so poisonous, it creates unpalatable environment that can foster friendship and the spirit of brotherhood. Some of them are so scary, one wonders if they are going to start another war. They tell everyone the last war was child play compared to the one that is coming.

How and when did it get to this stage? Older folks did not tell their children how we got along in those days and what Hausa, Igbo, Beroni, Efik, Yoruba etc brought to the table and shared. Some of us even spilled bile to poison our children against one another. The scar of the war has not healed. Africans do not depend on psychologists and sociologists to heel pain of the heart after a war. We depend on our elders. Elders have failed to ameliorate and learn from the war.

Each time riots, killing and maiming occur in any parts of Nigeria under the guise of religion or land disputes, only one group as victims, relate it to another war more than any other group. Those that leave their homeland on sojourn for better life elsewhere do it because more than any other group in Nigeria, failure is not an option in Ndi-Igbo. The Hausa believe that only God provides for tomorrow accepting his destiny. The Yoruba are halfway between Hausa and Igbo.

Please make no mistake about it, that clearly demarcated belief is old school though we still see the vestiges of them in each group. These days Hausa honesty, Igbo hard work and Yoruba accommodation have run thin. But we must keep on reminding ourselves why we got along so well in the past and strive to recreate and renew what brought us amicable together.