Fresh Crisis Looms in Warri over Demolition of Ijaw Quarters 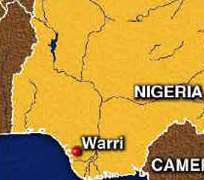 SAN FRANCISCO, December 30, (THEWILL) - The alleged demolition of an area believed to have been predominantly occupied by Ijaws in Warri, the Delta State capital, could spark off a fresh ethnic crisis in the city if not properly managed.

The exercise, said to have been carried out by soldiers of the 3 Battalion of the Nigerian Army, Effurun, accompanied by officials of the state Ministry of Environment on Friday, saw the demolition of structures in Lotiebiri quarters, an Ijaw quarters at the miller waterside in Ogbe-Ijoh, Warri South-west Council Area.

Already, ethnic embers are being fanned over the matter as the Ijaws are pointing accusing fingers on the state governor, Dr. Emmanuel Uduaghan, alleging that he was promoting an Itsekiri age-long agenda to take over all lands in Warri metropolis.

A group of leaders from the affected area under the aegis of Ogbe-Ijoh Clan Governing Council, Sunday, raised the alarm that the demolition of the ‘quarters’ could backfire and ignite fresh ethnic crisis between the Ijaws and Itsekiris.

It said the exercise which had sent many homeless could pit the two ethnic groups against each other as experienced in the Warri crisis.

“We wish to also remind the Delta State Government that it was similar oppressive attitudes towards the Ijaw people in Warri that led to the bloody ethnic crisis between the Ijaws and Itsekiri people in Warri from 1997 to 2003," the Council said in a statement jointly signed by Chief Clarkson Aribogha and the Secretary General, Hon Friday Deinghan.

The statement which was made available to journalists in Warri, Sunday, noted that “The Ogbe-Ijoh Kingdom, Warri views this round of intimidation by officials of the Delta State government with the aid of the Nigerian Army as another clandestine move by the Delta State Government under the leadership of Dr Emmanuel Uduaghan to promote Itsekiri age-long agenda to take over all lands in Warri metropolis.

"According to the statement, “The attack which is reminiscent of the 1895 attack and demolition of Ogbe-Ijoh in present Warri metropolis by the colonial government to enable them build the consular houses was done with the sole intention of sending the Ogbe-Ijoh people out from their land so as to enable Uduaghan’s Itsekiri kinsmen take over the land."

It also added:“No reason was given for the demolition as all the houses and stores destroyed are more than 10 metres away from the Warri/Sapele Road which is the Delta State Ministry of Environment prescription for residential house and stores from major roads and streets in cities in Delta State.

“Also all efforts to know the reason for the demolition from the soldiers and government officials were futile as the soldiers threatened to shot the residents and property owners."

The Council however said it would not sit back and watch what it described as an oppression.

“We wish to state without equivocation that we are ready and shall resist this daylight oppression. The Ogbe-Ijoh people and the Ijaw nation would not sit back and allow anybody under any guise to take over their heritage (land)," the statement warned.

THEWILL could not reach the Delta State Commissioner of Environment, Hon Frank Omare, to comment on the incident at the time of filing this report.