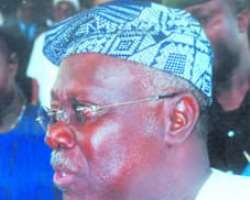 All is now set for judgment in the N100billion corruption trial of the former chairman of Nigerian Ports Authority, Chief Olabode George and five others. After a year of trial, the parties rested their case Tuesday morning with the submission of written addresses.

Lead defence counsel, Mr. Tunji Ayanlaja in his submission absolved his clients of guilt on any of the charges preferred against them by the Economic and Financial Crimes Commission, EFCC on the ground that they were charged individually in their personal capacities instead of the board as an entity. Moreover, he argued that there were 12 members of the board and wondered why only six were arraigned. He therefore urged the court to dismiss the case against his clients.

But the prosecution counsel, Mr. Festus Keyamo countered. He submitted that though NPA is a corporate entity, the members of its board as of the time the offence was committed were liable. Moreover, he pointed out that one of the witnesses (PW6), an expert, provided evidence to the effect that the contracts awarded during the period were split and inflated. He therefore urged the court to convict and sentence the defendants.

After listening to both prosecution and defence counsel, Justice Joseph Oyewole of the Ikeja High Court adjourned sine die, with a pledge to communicate the date of the judgment to the parties.