THE RETURN OF ANENIH TO NPA 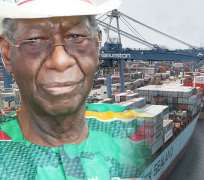 The highly-rated Board of the Nigerian Ports Authority (NPA), under the chairmanship of Chief Tony Anenih, was inaugurated, on February 17, 2009, consequent upon the approval and announcement of the composition of the board by the late President Umaru Musa Yar’Adua. After about two years in the saddle, the board was dissolved, along with others, by President Goodluck Jonathan.

But on December 20, 2012, Jonathan announced the composition of the board and returned Anenih as chairman. Two other members of the former board-Chief Austin Cosmos and Alhaji Aminu Babba Danagundi- were reappointed. There is a good sense in these reappointments: it will allow for continuation of the process of reform that the former board had already begun before it was dissolved.

There is no doubt that the reasons Yar’Adua appointed Anenih in 2009 must have remained the same reasons Jonathan has now reappointed him to lead the charge at the NPA: critical to his appointment was his wealth of experience that facilitated the Board’s job of sanitizing the chaotic state of the nation’s seaports.

Again, having performed creditably as Minister of Works and Housing from 1999 to 2002, especially in the prudent management of monies released for road infrastructure development, coupled with suave manner he oversaw the activities of the Board of Trustees (BoT) of the Peoples Democratic Party (PDP) from where he was abruptly shoved out in 2007 by former President Olusegun Obasanjo, it was thus easy for the late Yar’Adua to saddle him with the special assignment at the NPA.

Anenih had also, over the years, demonstrated the discipline to drive any process or assignment given to him at any point in time, and this has not waned with the passage of time. This disposition was greatly influenced by his illustrious career in the Police Force where he retired as Commissioner before joining partisan politics, which has remained his engagement till now.

Jonathan must have appreciated all of these in the reappointment of this political gladiator. It is also significant to place on record that this second missionary journey at the NPA will be aided by some new members-Senator Florence Ita-Giwa, Senator Lekan Mustapha and Hon. Hamza Dan Mahawi, who are profoundly and passionately committed to national development and will, therefore, use the platform of the NPA Board to do contribute to it in concert with Anenih.

There is no doubt that Jonathan has put together a formidable team of committed Nigerians with unquestionable integrity to run the board. Anenih is expected to re-enact in the new board which would be inaugurated any moment from now the verve he brought in 2009 into the leadership of the dissolved board. The board had, in February of that year, two days after its inauguration, begun immediate consultations with concessionaires, including AP Moller Maersk Group and Tin Can Island Container Terminal Limited.

The board members had also undertaken an inspection visit to the Wharf, in addition to holding a joint meeting with the then Acting Comptroller-General of Customs (specifically on February 20, 2009) at the end of which the NPA and the Nigeria Customs Service issued a joint press statement. The crux of the joint meeting was the admission that the task of lessening congestion at the Lagos ports was enormous and demanding.

What that admission meant was that something urgent must be expeditiously done. The board announced a number of measures relating to the entrance of vessels into the Apapa Ports. For instance, it approved the directive that ships with containers already on their way to Nigeria should still proceed to Lagos while ships yet to leave their home ports should be diverted to the Calabar, Port-Harcourt and Warri Ports, depending on the draught of the port and size of the ship.

According to the Managing Director, Alhaji Abdul Salam Mohammed, who read the text of the joint press statement, the NPA had concluded arrangements on incentives for vessels that would divert to the Eastern Ports. The board had consequently directed NPA to issue instruction to shipping companies and terminal operators to grant a general demurrage waiver and accept a flat rate of N100, 000.00 for 20ft container and N200, 000.00 for a 40ft container, where the cost of demurrage is higher.

A committee was emplaced to look into the charges of terminal operators and shipping firms. It was also decided that the 2,000 containers already gazetted for sale should be made public and auctioned without delay. These series of activities by the then NPA Board, soon after inauguration, activated the process of restoring sanity to the Lagos Ports and putting an end to the gridlock that goes by the name of ports congestion.

The Anenih-led Board had located the menace of ports congestion in the crookedness and dishonesty of some Nigerian importers and had lamented that there were more contrabands than genuine contents in the containers waiting to be cleared at the ports. Even without saying it, it is a notorious fact that Nigerian ports are infested with criminal elements and all sorts of dishonest people. In the history of port congestion in the country, there have always been unscrupulous businessmen and women who make profit out of the depressing situation.

Congestions provide them the opportunity to engage in shady deals which are not possible under normal port operations. Such people have and will always do everything possible to sabotage any efforts aimed at decongesting the ports. It is against the background of this reality that the enormity and difficulty of the problems faced by successive NPA Boards and its Management should always be considered. However, the success recorded by the former board within a short time should be appreciated.

But the legion of professional critics in Nigeria who assume the bully pulpit only when things go wrong, but find it difficult to mouth appreciation when there are visible achievements, have acted true to type. None of them, who cried that the port congestion was about to cripple the nation’s economy, had considered it necessary to draw the attention of Nigerians to the disappearance of congestion at the ports.

This is the tragedy of our nation: the unfortunate tendency of Nigerians to politicize and trivialize all things. Our political elites do not seem to want to learn to be optimistic; rather they have chosen to be downright pessimistic about almost everything. I know that opposition politicians will turn the evaluation of the new NPA Board into a political issue. That will once more be sad.

But I expect that the media will demonstrate objectivity and patriotism by walking their talks about commitment to hard work and dedication, good governance and national interest, and speak the truth about the positive developments at the NPA and the seaports administration, without fear or favour. For instance, was the dissolved board able to whip importers into compliance? Yes, it was able to do so. The new board is expected to build on the redemptive effort by the dissolved board and the current administration to continue the process of sanitizing and repositioning the NPA as well as the administration of the nation’s ports.

The new Board will be doing this for the nation, for the president who composed it for the special assignment and for posterity: the Board should be able to prove the point that it is not at the NPA to appropriate and deploy the Authority’s resources for the advancement of PDP’s fortunes at the next general elections. The Board should do well to help in fixing all problems facing the ports; it should help to bolster NPA’s service delivery capacity through a disciplined and uncompromising leadership. Anenih had done it before and he should be able to re-enact that feat