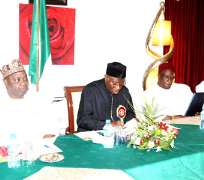 SAN FRANCISCO, December 21, (THEWILL) – In what was considered as a strategic move to plan for the New Year and reconcile all aggrieved members of the party, President Goodluck Jonathan met Friday with the national leadership of the ruling People’s Democratic Party (PDP) in a closed-door meeting that lasted more than three hours.

Present at the meeting which held at the Presidential Villa in Abuja were vice president Namadi Sambo, party chairman, Alhaji Bamanga Tukur, the party’s leaders at the National Assembly and Governors of PDP-controlled states, among others.

However, the absence of its National Secretary, Prince Olagunsoye Oyinlola, cast a doubt on the reasons for the meeting. Oyinlola is a loyalist of former President Olusegun Obasanjo, who is presently engaged in a cold war with President Goodluck Jonathan over his perceived plot to seek re-election in 2015.

However, the National Publicity Secretary, Mr. Olisa Metu, tried to clear all doubts as he maintained that the meeting was held to reconcile the differences among members, position the party properly to achieve the goals of President Jonathan’s transformation agenda and as well discuss other issues of national importance.

“It was a meeting between the executive, the legislature, the party’s national working committee and the governors of PDP. It has to do with addressing issues facing the nation, x-raying last year and looking forward to the New Year. We also looked at the vision of the President in line with the agenda of the party and how we want to ensure that we provide for the people of Nigeria.

“We want to assure Nigerians that the PDP is ready and able to satisfy the aspirations of Nigerians. We are going to produce a lot of reforms and innovations in the New Year to ensure that the people of Nigeria will be happy with the party in government,” Metuh said.

The PDP spokesman also dismissed the insinuation that the ruling party was instrumental to the de-registration of some political parties by the Independent National Electoral Commission (INEC).

“It is normal in a football match, when there is a winning team, the losing team will always accuse the referee of being bias. We are not the referees, we are not the arbiter, we are part of the team, we are playing in the field, we listened like them and we await the decision of INEC and we will abide with the decision of INEC which is an independent body,” he said.

He said Nigerians should look forward to new reforms and policies, which the president will unfold in the New Year.

On his part, the River State governor, Mr. Rotimi Amaechi, explained why the Governors’ Forum, which he chairs, requested to be included in the membership of the probe panel of the chopper crash that killed former Kaduna State gover, Mr. Patrick Yakowa and former National Security Adviser (NSA), General Andrew Owoye Azazi (rtd) in Bayelsa State last weekend.

“No. We are being misunderstood all the time. What we said was that we wanted to be given an observer status if we can’t participate so that we will bring a professional who will observe the process how it is going on and brief the Governors Forum. Not that we passed a vote of no confidence on those who are investigating.

“We felt that too many crashes have occurred in Nigeria and that it is proper that the Governors Forum have a professional advice so that we can know what contribution we can make to the Federal Government. Not that because our colleague was involved, after all, the General who died was not our colleague,” Amaechi explained.

Also fielding questions from journalists after the meeting, the Special Adviser to the President on National Assembly Matters, Joy Emordi, dismissed insinuations that the 2013 budget passed on Thursday had some issues, maintaining that it was deliberated upon before the passage.

Her clarifications came as the Benue State governor, Gabriel Suswam, re-affirmed that the meeting was convened to ensure that the leadership of the party works in a coordinated manner.

“I think it is very important that the president meets with us because we can understand and appreciate the issues better so that this country will have better leadership. And then we can have better ways of governing the country. So, he called and solicited our support moving forward.

“It is all about bonding together. We understand that sometimes there are at times statements that are not coordinated in the states and at the centre, and we are supposed to be running the same government.

“All that we discussed here among the president, the governors and the party is about how we can bind the party together. If we have that bonding together, all the seeming misunderstanding, some of them are artificial anyway, will be resolved. And that will create a better room and enabling environment for all of us at all levels to provide better leadership for this country,” he explained.