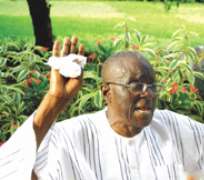 The wheel of justice momentary grinded to a stop yesterday as the nation's Judiciary turned out in honour of one of its leading lights, Chief Ganiyu Oyesola Fawehinmi, whose remains laid in state at the new Nigerian Law Publication House (NLPH), Alausa, Lagos.

It was Fawehinmi's formal and last visit to the sprawling N600 million edifice, which he had planned as his corporate headquarters for his law practice as well as his publishing business. The late legal icon would have commissioned the building for use in December, according to Head, Gani Fawehinmi Chambers, Mr. Adindu Ugwuzor.

Also, admirers of the late legal titan yesterday poured out on the streets in thousands to pay their last respect to Fawehinmi as his motorcade made its way to Alausa for the lying-in-state.

Workers along the roads and adjourning streets left their offices to catch a glimpse of the late rights activist in his glass casket and take photographs with their mobile phones.

Meanwhile, the Nigeria Labour Congress (NLC) yesterday resolved to celebrate Fawehinmi on Friday with a procession around Lagos. His remains would also lie in state at the Labour House, Yaba.

The NLC, according to a source, was bowing to the wish of the legal icon who wanted congress to play a prominent role in his burial.

Also, in honour of the late Fawehinmi, the Osun State Election Petitions Tribunal yesterday adjourned its sitting to Friday to enable lawyers attend a special court session in Lagos today as part of the activities lined up for his burial.

Akin Olujinmi (SAN), lead counsel to the Action Congress (AC) candidate, Rauf Aregbesola, had on Monday through an application before the tribunal, which was supported by the Peoples Democratic Party (PDP) lawyer, Yusuf Alli (SAN), sought an adjournment so that lawyers could participate in the special court session in honour of the deceased.

The tribunal had on Monday before the day's proceeding observed a minute's silence in honour of Fawehinmi.

Lawyers in their hundreds lined both sides of the road leading to the NLPH hours before the motorcade conveying the body there arrived at about 2.00p.m. A 10-man trumpet band led the congregation in rendering the National Anthem at the building's main gate after which the remains were moved in for the lying-in-state.

Justice Abiodun Adeyemi and Barrister Hafsat Raheem offered Christian and Islamic prayers in that order to start off the procession. First to go in were Justices and Senior Advocates, including Justices Adeyemi and Lawal Akapo, Rickey Tarfa (SAN) and Tayo Oyetibo (SAN). They were followed by Senators Femi Okurounmu and Olabiyi Durojaiye; Nosa Egiebo and Onome Osifo-Whiskey of The Tell publications.

Compire at the event and a close associate of Fawehinmi, Mr. Femi Aborishade, told the gathering that the occasion marked the opening of the building since Fawehinmi would not be around for a formal commissioning at a later date when all finishing touches would have been put to the structure.

Ugwuzor disclosed that Fawehinmi was so passionate about the Library that when he came to inspect it in July this year, he prayed to God to keep him alive to dedicate it for public use.

Aborishade said Fawehinmi died as an enemy of the government.

He read out a statement Fawehinmi made on January 4, 1990 when he was sent to prison by Justice Ligali Ayorinde for 12 months over his actions on the assassination of then Editor-in-Chief, Newswatch Magazine, Mr. Dele Giwa, thus: "You temporarily suspended my activities for the people against the government but I will only go to rest. I will not give up the struggle in exposing those who murdered Dele Giwa. He cannot be slaughtered without his death being queried.

"I owe it a duty to Nigerians and I am prepared to lay down my life. I am not poor by all standards but I am against poverty that government has continued to allow to live with the people of this country. I am against government because I asked for free education, free medical care, among other things."

Aborishade noted that Fawehinmi suffered 32 detentions in the police and state security cells across eight prisons. He added that the late lawyer's house and chambers were invaded 16 times by security agents while his international passport was seized 10 different times.

The NLC, by its General Secretary, John Odah, recalled with pride the noble relationship between the union and Fawehinmi.

Odah recalled how Fawehinmi aligned with Labour to form the Labour and Civil Society Coalition, a platform that was used to fight the crusade and dictatorial military administration in the country.

"He consistently and publicly stood by the Labour movement when the NLC's existence came under heavy threat under the regime of former President Olusegun Obasanjo.

"For his consistency and doggedness, we join other Nigerians and compatriots all over the world to celebrate the life of this unique Nigerian. He committed his personal life and resources to defend the rights of the Nigerian people and promote democracy and human rights. We do not need to mourn him, rather, we should all use this moment to recommit ourselves to the struggles of our people, which we see as one means of honouring him, even in death.

"Chief Fawehinmi has been involved in the defence of the rights of Nigerian students and the poor since the 60's soon after he started his law practice. He participated actively in the struggle of the Nigerian people against the imposition of the International Monetary Fund (IMF)-driven Structural Adjustment Programme (SAP) during the defunct Gen. Ibrahim Babangida regime.

"He led Nigerian people in protests on the streets, and in legal battles in courtrooms in several parts of the country. He was detained countless times as a result of his involvement in these struggles, and even when his life was obviously at risk, he refused to leave the country, particularly during the regime of late Gen. Sani Abacha.

"He dedicated his life to advancing the fortunes and development of the Nigeria people. In all his struggles, he stood out as a unifying pillar. He was a totally detribalised Nigerian."

In its tribute, NUBIFE in a statement by its General Secretary, described Fawehinmi as "a formidable non-state actor who had impacted on quality of lives than many self-styled statesmen."

A University of Lagos professor, Lai Olurode, in his tribute, urged all Nigerians to commit themselves to the values and ideals which Fawehinmi epitomised.

Justice Akande is the state's 13th Chief Judge and the third female judge since the creation of the state in 1967.

Governor Fashola noted that the legal profession would no longer be the same with the exit of Fawehinmi.

He urged the new Chief Judge to ensure discipline and keep the sanctity of court premises in the state by ensuring that political praise singers and rented crowd ceased to take over court premises when their paymasters appeared in court.