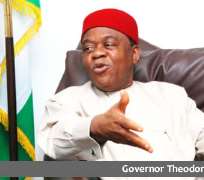 Abia State Governor, chief TA Orji says he has provided a conducive environment for investment in the state, hence the need for Abians in Diaspora to come home and partner with the state in area of economic and social development.

The governor made this declaration in Lagos in an interactive session with members of Abia Think Tank.

In a statement by his chief press secretary, Ugochukwu Emezue, Governor Orji hinted that unlike in the past when the atmosphere was characterized by fear, occasioned by the activities of kidnappers, the state is now secured more than ever, as this ugly trend has been consigned to the dust bin of history.

Chief Orji noted that with security in place, investors are now making Abia their destination point.

He specifically revealed that shoprite; a business conglomerate is now building its outfit in Umuahia the state capital.

Chief Orji maintained that he is not regretting the huge investment he is making in securing the state.

Speaking further, the governor stated that most of the projects he is building in the state will be commissioned next year.

He stated that the equipment for the dialysis center will be installed in January 2013.

Chief Orji assured that he will strive to make Abia the envy of other states.

Earlier in his speech, the chairman of Abia Think Tank, Mazi Sam Ohuabunwa commended the governor on the infrastructural development going on in the state.

He made it clear that the leadership style of the governor is highly appreciated.While thanking chief TA Orji for the achievement he had made in terms of security, urged him not to relent in giving Abia a new face.