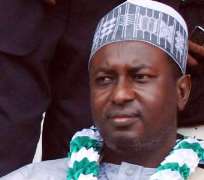 The oath of office was administered on Yero by the Kaduna state Chief Judge, Justice Rahila H. Cudjoe at the state’s Government House .

Speaking shortly after he was sworn-in, Yero pledged to build on the good foundation laid by late Yakowa. He said the vision of late Yakowa was to secure, unite and develop Kaduna state.

“Sir Yakowa invested so much on this and started reaping the fruits of his labour. He wished to consolidate and advance on the achievement so far made and hence tagged the 2013 budget of the state ‘ Budget of consolidation and advancement’ I sincerely desire to build on the good foundation that my boss has laid. I therefore covet your prayers for God’s wisdom, guidance and direction,” he prayed.

He added that: “We are living testimonies to the fact that our amiable Governor, Sir Yakowa who came, did serve humanity in various and diverse capacities well and has suddenly without notice returned to our creator. His humility, dedication to duty, fairness to all and his high sense of humour endeared him to many irrespective of religion, tribal or sectional differences,” he said.

Yero was commissioner of Finance in Kaduna state before the death of President Umaru Musa Yar’Adua.

He was elevated to the position of Deputy Governor to the late governor after then governor Namadi Sambo was picked by Goodluck Jonathan to serve as Vice President.