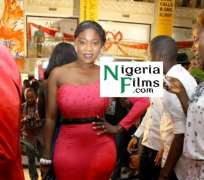 According to a list of most searched Nollywood celebrities released by Google, Mercy Johnson, for the second running, topped the most searched actor in Nigeria. The list was recently released by the world's leading search engine platform.

In the list of 10 most searched actors in Nigeria, Mercy Johnson came first again after she achieved this feat in 2011 as a result of her August 2011 pre-marriage controversies with a woman identified as Lovelyn who claimed to still be legally married to Mercy Johnson's husband, Prince Odi Okojie.