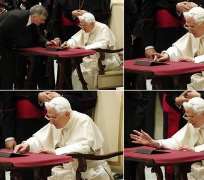 After weeks of anticipation bordering on media frenzy, Pope Benedict solemnly put his finger to a computer tablet device on Wednesday and tried to send his first tweet - but something went wrong.

Images on Vatican television appeared to show the first try didn't work. The pope, who still writes his speeches by hand, seems to have pressed too hard and the tweet was not sent right away. So, he needed a little help from his friends.

Archbishop Claudio Maria Celli of the Vatican's communications department showed the pontiff how to do it, but the pope hesitated. Celli touched the screen lightly himself and off went the papal tweet.

"Dear friends, I am pleased to get in touch with you through Twitter. Thank you for your generous response. I bless all of you from my heart," he said in his introduction to the brave new world of Twitter.

The tweet was sent at the end of weekly general audience in the Vatican before thousands of people.

The tweets will be going out in Spanish, English, Italian, Portuguese, German, Polish, Arabic and French. Other languages will be added in the future.

The pope already had just over a million followers in all of the languages combined minutes before he sent his first tweet and the number was growing.

PAPAL Q AND A
Later on Wednesday after the audience was over and the television cameras turned off, the pontiff answered the first of three questions sent to him at #askpontifex.

The first question answered by the pope was: "How can we celebrate the Year of Faith better in our daily lives?"

His answer: "By speaking with Jesus in prayer, listening to what he tells you in the Gospel and looking for him in those in need."

The pope, who, as leader of the Roman Catholic Church already has 1.2 billion followers in the standard sense of the word, won't be following anyone else, the Vatican has said.

After his first splash into the brave new world of Twitter on Wednesday, the contents of future tweets will come primarily from the contents of his weekly general audience, Sunday blessings and homilies on major Church holidays.

They are also expected to include reaction to major world events, such as natural disasters.

The Vatican says papal tweets will be little "pearls of wisdom", which is understandable since his thoughts will have to be condensed to 140 characters, while papal documents often top 140 pages.

The Vatican said precautions had been taken to make sure the pope's certified account is not hacked. Only one computer in the Vatican's secretariat of state will be used for the tweets.

After Wednesday, Benedict won't be pushing the button on his tweets himself. They will be sent by aides but he will sign off on them.

The pope's Twitter page is designed in yellow and white - the colors of the Vatican, with a backdrop of the Vatican and his picture. It may change during different liturgical seasons of the year and when the pope is away from the Vatican on trips.

The pope has given a qualified welcome to social media.

In a document issued last year, he said the possibilities of new media and social networks offered "a great opportunity", but warned of the risks of depersonalization, alienation, self-indulgence, and the dangers of having more virtual friends than real ones.

In 2009, a new Vatican website, www.pope2you.net, went live, offering an application called "The pope meets you on Facebook", and another allowing the faithful to see the pontiff's speeches and messages on their iPhones or iPods.

The Vatican famously got egg on its face in 2009 when it was forced to admit that, if it had surfed the web more, it might have known that a traditionalist bishop whose excommunication was lifted had for years been a Holocaust denier.