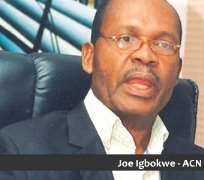 The Lagos State chapter of the Action Congress of Nigeria has advised all those that continue to play politics with the recent restriction of okada operators from some roads in Lagos to devise better ways of furthering their political interests than hanging on the okada tailboard for political gains. The party says such advice is necessary as some politicians and their cohorts have refused to see the futility of trying to cash on the intelligence of Lagosians by their continued fueling of bad blood against the state government over the okada ban.

In a release in Lagos, signed by the Lagos State Publicity Secretary of the ACN, Joe Igbokwe, the party said it was reacting to the recent protest against the restriction of okada organized by the some groups in Lagos.

The party insists that the state government acted in the best interests of Lagosians in restricting okada operations from the major and busy roads in Lagos while allowing their operation in some other inner roads in the state.

'When we looks into the fact that Lagos is about the twelfth state in Nigeria to restrict okada operations, we are convinced of the political undertones of the recent protest against the okada restriction. One of the notable leaders of the protest who claims to be the National Secretary of a political party is a well known antagonist of Lagos who has been working in cahoots with desperate politicians in the PDP against the interests of the present government in Lagos. It is convenient for him to now mutate to a civil society activist to mask his well known political interests, which now find expression in fueling the okada issue beyond proportion.

'Right thinking Lagosians will like to know if Lagos is the first state to ban okada operations. If it is not, why are the same people who promoted the bizarre poverty that brought about the okada boom still hanging on the tailboard of okada politics for selfish political interests. Why is it that PDP and its allies that introduced okada ban in Nigeria by totally banning okada in Abuja and has followed up with about ten states, being the one that is fouling the airs in Lagos with the restriction of okada operations in some roads in Lagos? So is Lagos a dumping ground for the banned okada in these PDP states and the federal capital?

'Lagos ACN urges Lagosians to ignore these desperate politicians and their cohorts who masquerade as activists for they are playing a well known game otherwise why have they not protested okada ban in the many PDP states that took that action before Lagos did? We want Lagosians to face the big picture from this necessary ban and this obtains in the improved security of lives and properties, decreased number of road accidents, saner traffic situations and a more conducive environment in Lagos.  We urge Lagosians to be wary of those who are busy fanning the embers of hate against the State government and the party for doing what we should do for a better Lagos. We want them to know that it is all about selfish political interests and Lagosians should avoid these interests.

'We want to let Lagosians know that the temporary pains that attended the okada ban is natural and that as nature abhors vacuum, the Lagos State government is working to ensure that these pains are mitigated.'