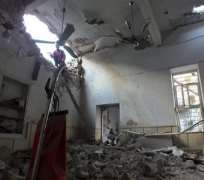 Syrian rebels clashed with forces loyal to President Bashar al-Assad near Damascus airport on Tuesday, battling for the capital's outskirts after 20 months of conflict which the United Nations said has driven half a million people from the country.

Fighting near the airport, 20 km (12 miles) south-east of Damascus city center, is part of a broader confrontation between Assad's forces and rebels who hold a near continuous arc of territory from the east to the southwest of Assad's power base.

"There were very heavy clashes since yesterday in the town of Haran, on the eastern side of the airport, and there has been intermittent fighting in the Aqraba area by the airport," said rebel spokesman Mussab Abu Qitada.

"The rebels are trying to maintain an encirclement of the airport. They are also still surrounding the Aqraba air base, on the international airport road," he said by Skype from Damascus.

The center of the capital, shielded for months from the violence which has killed 40,000 people since March 2011, echoed to the sound of shelling from Monday evening, residents said.

The shelling appeared to be directed from the Qasioun mountain range, overlooking northern Damascus, towards the rebellious southern suburbs.

The mainly Sunni Muslim rebels have made military gains against the forces still loyal to Assad, many of them from Syria's Alawite religious minority. The rebels have seized military bases across the country in the last month and are starting to encircle the capital, where power cuts and food shortages are hurting residents bracing for winter.

"We are barely surviving," said a woman in the Midan district who would only identify herself as Umm Ahmed. She said she queued in vain from 6 a.m. until midday at bakeries which ran out of bread before she could buy any at the normal price, leaving her looking for supplies at much inflated rates.

"If I want to buy it on the street, the black market price is 150 lira (about $2) - three times the cost," she said. "We are living without electricity and water, and the food is very expensive."

Central Damascus has been suffering up to 12 hours of power cuts a day, residents say. Movement around the city, peppered with security checkpoints, is increasingly difficult and soldiers, security forces and local vigilantes are everywhere.

HALF A MILLION REFUGEES
The conflict started with street protests inspired by uprisings across the Arab world. Demonstrations were met with gunfire by Assad's forces and spiraled into the most protracted and destructive battle of the Arab uprisings.

The fighting has driven hundreds of thousands of Syrians into neighboring countries and the United Nations refugee agency UNHCR said on Tuesday more than half a million were either registered or awaiting registration in the region.

Lebanon is now host to 154,387 registered Syrian refugees, Jordan has 142,664, Turkey 136,319, Iraq 65,449 and North Africa 11,740, UNHCR said in a statement issued in Geneva. In addition, there are more than 1.5 million Syrians who fled violence in their homes and are displaced in safer areas within the country.

Large numbers of Syrians have also crossed into neighboring countries but have not yet come forward to register for refugee status and assistance, it said. These include about 100,000 in Jordan, 70,000 each in both Turkey and Egypt and tens of thousands in Lebanon, it said, citing government estimates.

Assad's political and armed opponents, dogged by splits and rivalries throughout their battle to end his family's 42-year rule, have established a more unified political opposition and military command, hoping to win international recognition and stronger support on the battlefield.

"What we need now is the heavy weapons and we expect to get them after the formation of this. The anti-armour and anti-aircraft weapons are what we are expecting," he told Reuters by Skype from Turkey before heading on a trip to the Gulf.

"The Qataris and the Saudis gave us positive promises. We will see what will happen," he said, adding that officials from Western countries, who also attended the meeting in Turkey, had not mentioned arming the rebels but talked about "sending aid".

The new political opposition coalition, formed in Qatar last month, will meet officials from countries mostly opposed to Assad in Morocco on Wednesday, hoping for a clear recognition as the legitimate representatives of the Syrian people.

France, Britain, Turkey and the Gulf states have already granted the formal recognition. The European Union, in a meeting on Monday, moved a step closer towards recognition and the United States has suggested it could also endorse the coalition.