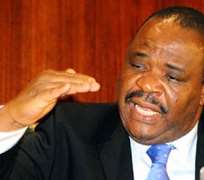 ABUJA, December 10, (THEWILL) – The House of Representatives Monday said a total of N1.414 trillion had been appropriated by the National Assembly for the road sector since 1999.

The revelation came as the Minister for Works, Mike Onolememen, disclosed that the road sector needs a whopping N500 billion yearly to put the nation's roads in shape.

Both revelations were made yesterday at the public hearing on the "urgent need to address the near collapse of federal roads across the country, and a bill for an act to provide for the maintenance of public infrastructure, 2011 and for other matters connected therewith", organised by the House Committee on Works.

Chairman of the committee, Hon. Ogbuefi Ozomgbachi, in his welcome address, lamented that despite the collossal amount of funds appropriated by the National Assembly in the past 13 years, majority of the roads were in a deplorable state.

"Between 1999 and 2012, the National Assembly had appropriated about N1.414 trillion for the road sector. And yet out of about 34,400km of federal network, only 35 percent is paved and substantial percentage of it in varying degree of distress and are pot-holes ridden."

In his presentation, the Minister of Works, Onolememen, said Nigeria has a national road network of about 200,000 kilometres out of which only about 65,000 kilometres are bituminous roads, while the rest are earth roads.

He blamed the poor state of the roads on inadequate budgetary provision for the sector, lamenting that in some cases funds are not fully released.

The minister explained that the average budget of about N100 billion for road development is grossly inadequate for the nation's 35,000 kilometre of federal road network and "for a country that budgets N300 billion and N150 billion for its Central Bank and Deposit Insurance Corporation respectively."

Onolememen disclosed that in order to change the state of the roads, the ministry plans to adopt the Strategic Highway Investment for Transformation (SHIFT) Programme.

According to him, the ministry has plans to develop green field projects that include the second Lagos outer ring road golden triangle super-highway.

While declaring open the public hearing, Speaker of the House, Aminu Waziri Tambuwal, expressed dismay that road accidents today constitute the highest killer in the country due to the poor condition of roads.