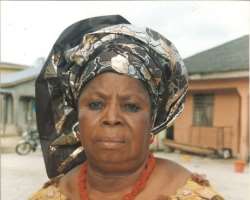 My dear brethren,
You will recall that my mother - Mrs Ibiwari Brown (over 76yrs old)

Abalama, Asari-Toru Local Government Area of Rivers State. Those who

did the act were not known. The security went to work to ensure her

release, the media went work to condemn the act and called for her

unconditional release, friends called to sympathize with the family,

Jesus Christ who spoke on their behalf, the traditional rulers also

frowned at it.
Two months after, nothing was heard except that the kidnappers asked

for my head or the sum of N30m to get her released. This was not

forthcoming. The kidnappers resorted to torture this old woman. she

was flogged several times like a common criminal. From 18th June to

22nd August she had no water to bath. Her room was her toilet and she

was fed with Indomie once a day. The ration was not enough to feed a

3yr old child. The treatment became worse when they realized that they

had 'invested in a bad market'. The food ration changed and mama cried

and begged them for food. when food was no more available to her, she

would bless the glass of water given to her before drinking it. That

serves as food and her hunger will be satisfied. I wish you have the

opportunity to hear this testimony directly from her.

Being frustrated, mama attempted to escape from this men on the 2nd of

August, 2009 at about 10pm. She went to a nearby fishing settlement

willing to assist. She was recaptured by the morning of 3rd August,

2009 and took her back to the camp. They agreed that she will be

with the palm. She was then blindfolded and was ready to kill her when

suddenly my call went through to them and they suspended the action.

sacrificial animal almost dead. They then called back and told me that

permitting her burial. when they went back few hours later perhaps to

bury her, she was found alive and crying like a baby. She was taken

back to her room and permanently lucked up.
On Friday 21st, inst. they decided to let mama free. On their way the

speed boat had an accident. It was in the night. She was left in the

mangroove till the 22nd. She was moved from there to a fishing

settlement at a place called 'Namasibi' around the New Calabar River.

The inhabitants were afraid initially but when she explained the

circumstance and introduced herself, they mobilized and moved her to

State.
Permit me to use this opportunity to thank you specially for your

concern. You have indeed proved a sense of brother hood and your

support and encouragement will remain indelible.
Chief Aroloyeteim Brown, JP.
,
....Love those who hate you and pray for them that plan evil against

you. Know that
only your friend know your secret and only he can reveal it...