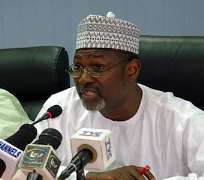 They include Fresh Democratic Party, which was the brainchild of Pastor Chris Okotie; and Nigeria Advance Party, which was started by lawyer and businessman, Tunji Braithwaite, in the Second Republic.

Also notable on the list was the Second Republic's powerful People's Redemption Party, which in 1979 won Kaduna and Kano States from a rampaging National Party of Nigeria, the forerunner of today's Peoples Democratic Party (PDP).

According to a statement by INEC just a short while ago, the action is an exercise of the Commission's powers based on the I999 Constitution as amended and the Electoral Act 2010 as amended.

“The Commission hereby reiterates its commitment to relating with political parties in accordance with extant laws and for the benefit of our electoral democracy,” the statement said.

Pastor Okotie has run for the presidency three times on the platform of FRESH, insisting he is the change that Nigerians desire.

Days before the 2011 presidential election, he said, 'There is nothing that PDP can do for this country. It's abundantly clear that PDP has become politically irrelevant in the sense that they have not been able to proffer solutions to problems that beset our people.

None of the parties could be reached tonight to get their comments to the sudden de-registration in the middle of the night, and what their political options are.