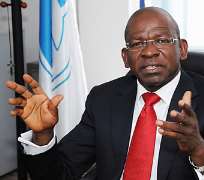 ABUJA, December 05, (THEWILL) - The Managing Director of Nigerian Export-Import Bank, Mr. Robert Orya has said that the bank plans to set up a shipping line to boost trade between Nigeria and other African countries.

Mr. Robert Orya disclosed this when he appeared before the House of Representatives Committee on Banking and Currency to defend the bank's 2013 budget proposal.

Orya said the decision was for the purpose of facilitating transportation of goods to both the West and Central African sub regions adding that road transportation which is presently widely used for the movement of Nigerian exports posed many obstacles and bottlenecks.

"There is need for NEXIM to set up a shipping line because for goods to be shipped to Tema in Ghana from Lagos, it would take not less than 60 days for the ship to arrive at its destination."

According to him, "The ship would first of all travel from Lagos to Europe before returning to Ghana."

He further stated that already Nigerian goods were widely distributed within the West and Central African sub-regions.

He further stated that the bank was considering a fresh initiative whereby it would grant foreign importers of Nigerian goods credit to encourage them to expand their transactions in the country.

The managing director expressed frustration over the bank's efforts to recover debts it is owed across the country.

According to him, "We have used the Economic and Financial Crimes Commission (EFCC) and other security agencies in the country and even moral persuasion in our efforts to recover debts we are being owed but we haven't achieved much in this regard."

He lamented that the profit the bank has made since its establishment has been eaten up by huge debt it was being owed.

In his speech at the occasion, the Chairman of the Committee on Banking and Currency of the House of Representatives, Hon. Jones Onyereri pledged the readiness of the House to assist the bank recover its debts but insisted that management of the bank should provide comprehensive information on the debts.