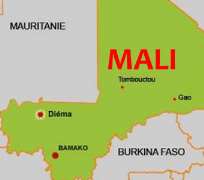 SAN FRANCISCO, December 04, (THEWILL) - Plans by the 16 nation members of the Economic Community of West African States, ECOWAS, to launch a military expedition to dislodge the al-Qaida backed Islamic extremists in Mali received a non-committal message on Monday from the United States when one of its top commanders in Africa, Army Gen. Carter Ham warned against any premature military action in Mali, explaining that the al-Qaida backed Islamic extremists have strengthened their hold on the northern part of the country.

An Associated Press report quoted the Army General as saying that that any military intervention done now would likely fail and would send the precarious situation there back "even farther than they are today."

The general was speaking on the sidelines at a meeting where members of the African Union and the United Nations are currently discussing the funding, troops and other assistance necessary to take back northern Mali from the extremists that took control there earlier this year.

"Negotiation is the best way," Ham told an audience at George Washington University's Homeland Security Policy Institute. "Military intervention may be a necessary component. But if there is to be military intervention it has to be successful, it cannot be done prematurely" adding that the plans to free the northern part of Mali will begin to play out in the coming weeks.

This is the first time an American army general has publicly commented on the situation in Mali as the comments provided greater public detail on the worrisome coordination between al-Qaida in the Islamic Maghreb, which currently is now using the northern part of Mali as the centre for its operations and the radical Islamist Boko Haram sect based in the northern part of Nigeria where it is involved in a low level urban guerilla warfare with the central government.

According to the general, the growing links between the two terror groups poses the greatest threat to the region.

The Africa Union has been pressing the U.N. to take immediate military action to regain northern Mali, and Ham said that military intervention may well be necessary. But he said the African-led collaborative effort that has worked in Somalia may be the right model to use in Mali. That effort generally involves intelligence and logistical support from the United States, as well as funding and training, but the fighting is led by African nations and does not include U.S. combat troops on the ground.

Al-Qaida in the Maghreb, QIM, is the best financed al-Qaida affiliate in the sub-region and officials have long believed that it has been collaborating with the Nigerian Boko Haram sect. On Monday, Ham said that AQIM is providing financial support, training, and explosives to Boko Haram and "the relationship goes both ways."

In addition, Ham noted that Libyan mercenaries who left the country after Gadhafi's ouster have been sending heavy weapons into Mali. With that, he said, it's not unexpected to see militant training camps being set up in the ungoverned spaces, and militants increasing their recruiting efforts.

Boko Haram has made it known that the group wants to expand its activities across the region and into Europe even as it is blamed for more than 760 killings this year alone, according to an Associated Press count.

The group's name means, "Western education is sacrilege" in the Hausa language of Nigeria's north, and it argues for the implementation of a strict Shariah law across the country.

In other comments, Ham said the military is still reviewing what adjustments it may want to make in the aftermath of the attack on the U.S. consulate in Benghazi that killed the ambassador and three other Americans.

While he would not comment on the details of the incident or the military response, he said the review also will address whether there should be any changes made to the Marine security teams that guard the embassies and consulates.