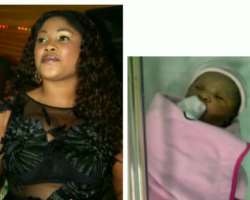 Nollywoodgists.com just got a report that controversial Nollywood actress, Bisi Ibidapo Obe popularly known as Bisi Omo logba logba, has been delivered of a baby girl. Bisi, as we learnt from industry sources, gave birth to a baby girl this morning at Reddington Hospital, Ikeja, Lagos at about 9am as against the initial reported plan of her child delivery in Canada..

Few weeks ago, Bisi was in the news over the paternity of her pregnancy, which she reportedly said was for controversial lawmaker, Dino Melaye, a former federal lawmaker from Kogi State. She later reportedly challenged Dino for a DNA to ascertain the child's real father.

She later travelled to Ghana to rest from the dust the controversy created before heading to her initial destination of her child delivery, Canada, until she gave birth in Lagos this morning.

We hear that she is in good condition with the child.