ECB, IMF Press Euro Zone To Reform As Crisis Far From Over 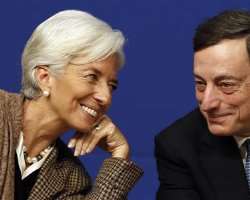 The euro zone's crisis is far from over and its members must consolidate their budgets and forge a banking union to put the bloc on a more stable economic footing, the leaders of the IMF and European Central Bank said on Friday.

Underlining the bloc's woes, data showed both German retail sales and French consumer spending falling faster than expected as well as stubborn Spanish inflation that will likely lift the cost of state pension rises for an already hard-pressed budget.

Euro zone wide numbers showed another 173,000 people joining record jobless queues in October, while a dive in consumer price inflation offered only limited relief to households struggling with the recession.

Speaking in Paris, where the government is trying to dispel concerns raised by the IMF that France could be left behind as Italy and Spain reform at a faster pace, ECB President Mario Draghi said the euro zone's three-year-old crisis was likely to stretch deep into next year.

"We have not yet emerged from the crisis," Draghi told Europe 1 radio. "The recovery for most of the euro zone will certainly begin in the second half of 2013."

ECB policymakers hold their regular monthly policy meeting next week and are widely expected to leave interest rates on hold at a record low of 0.75 percent. Economists are divided on whether the central bank will cut next year.

Draghi has stressed the ECB is ready to help tackle the crisis by buying potentially unlimited amounts of sovereign debt under its new bond-buy plan but until Spain applies for aid, a prerequisite for the ECB to intervene, it cannot use the tool.

Resisting fresh ECB action, Bundesbank chief Jens Weidmann said on Thursday central bankers had done more than enough to fight the crisis and it was now up to governments to act by reforming their economies and making the banking sector solid.

BANKING UNION
Draghi, in Paris for a conference with top financial officials, said euro zone governments should push ahead quickly with implementing a banking union which must apply to all banks to avoid fragmenting the sector.

His position puts the ECB, which would take on the role of pan-European banking sector, at odds with Germany. Berlin has said that unified banking supervision under the aegis of the ECB should apply only to the bloc's largest banks.

Joerg Asmussen, one of the ECB's key negotiators for a closer integration of the euro zone and a former deputy German finance minister, said late on Thursday a new European banking supervisory body would not be ready to operate fully before 2014.

But International Monetary Fund head Christine Lagarde pressed for swift implementation of a banking union that would have powers to supervise all banks in the euro zone.

"Banking union seems to us to be the first priority," Lagarde said during the meeting with top financial officials in Paris, adding that closer budgetary consolidation should be the next priority.

The economic situation in the euro zone remained fragile and governments should maintain a "reasonable" pace of budgetary consolidation to avoid crimping growth, she added.